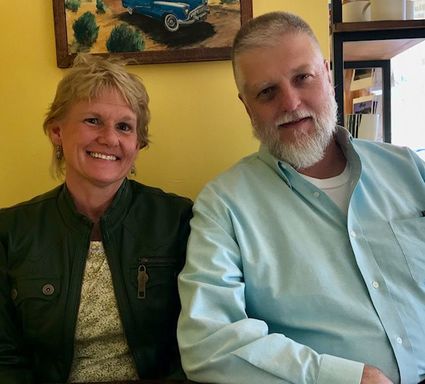 Photo by Vicky Dorvee Kim and Alan Schwarz have pitched in innumerable times to help out the community. They plan to move to Buena Vista later in the year, after living in Niwot for over 30 years.

Kim and Alan Schwarz have racked up thirty some years of odd jobs for their resume. A little of this and a little of that adds up to a whole lot of doing good. When you have kind hearts, some really cool tools, and simply notice that something needs to be done, your hometown is fortunate to have you waiting in the wings.

One of Niwot’s stealth power couples, the Schwarzes have made it their second nature to jump in and plow parking lots, cart around 300-pound Left Hand cement chairs, buy hundreds of floating ducks for Nostalgia Day creek races (a duck for each student at their preschool) and to make sure a grand piano is in its place on the sidewalk when spring arrives so it can be filled with flowers.

They’ve contributed time and energy to setup and cleanup for Rock ‘n Rails and participated in Fourth of July parades. Alan used his bobcat to work on the Niwot’s Children’s Park; he’s moved dirt, delivered mulch, and installed fence posts for the park. They’ve supplied food for various town events and pitched in so many ways, it’s hard for them to recall it all.

Wise Buys Antiques store owners Tim and Carrie Wise have worked side-by-side prepping for events with Kim and Alan Schwarz over the years. Their camaraderie and the ease with which they’re able to call upon each other is remarkable.

“Alan and Kim are what community is all about,” Tim said. “They’re always ready to step up to the plate and do what's needed. Just today they were driving through town and saw us lifting a huge heavy piece of furniture and they yelled out, ‘Need some help?,’ and, they of course stopped to help us.”

“Kim and Alan Schwarz have been tireless contributors and volunteers for Niwot,” Anne Postle, owner of Osmosis Architecture, said. “Whenever a volunteer is needed for a town event or to deliver ‘Left Hand’ chairs with a bobcat, Kim and Alan are always there.”

Kim is originally from Buffalo, NY, and moved to Colorado in 1979 with her family. She attended Regis University and worked for Valley Labs (which, after several iterations, became Medtronic) for 30 years, primarily in quality assurance.

Alan’s family moved to Colorado when he was nine years old. He went to Niwot Elementary School and attended high school in Longmont. He earned a degree in criminal justice which he put to use as a Lyons police officer for five years on a part time basis. He simultaneously worked part time for Valley Labs and eventually worked for Encision, Inc., in Gunbarrel where he became the director of sales administration.

Alan said Kim was one of the first people he met at Valley Labs. They married in 1992 and raised two sons who now live in Denver. The Schwarzes have a 13-year-old granddaughter and an 11-year-old grandson. They also admit to having “two spoiled dogs” — Max, a Yorkie-poo, and Matilda, an Old English bulldog. Max is a therapy dog for a Longmont nursing home and both dogs have been instrumental in teaching children about canine safety.

While working their corporate day jobs, they also purchased the Neighborhood Learning Center of Niwot (NLC) which they ran for the last 34 years. Juggling full time jobs and the preschool was a challenge they handled admirably. They both retired from their traditional jobs in the past five years and were able to take on more active roles at NLC. It was just recently announced they will be closing the business at the end of this school year and that they plan to move into a house they are building in Buena Vista, Colorado, situated on seven acres.

They’ll be living in the Arkansas River Valley, or as it’s referred to, the Colorado Banana Belt where temperatures are less extreme in the summer and winter months. This transition will lead them to an entirely new lifestyle. There’s musing talk of four wheeling, fishing, riding dirt bikes, and hiking.

But first, there are projects to make their new home exactly to their liking – taking on landscaping and a back patio overlooking the river, for instance. That laudable collection of tools will live in a new garage and shop area where Alan said he plans to “tinker.”

“It will be a lot quieter there,” Kim said. “Niwot is a tough town to leave, but we found someplace we really want to live and things really fell into place. The planets aligned for us to move.”

“Kim and Alan are two folks you always can count on,” Carrie Wise said. “It actually brings tears to our eyes that the reality is they will be leaving Niwot. So the next time you see them, give them a big hug and tell them you'll miss them.”