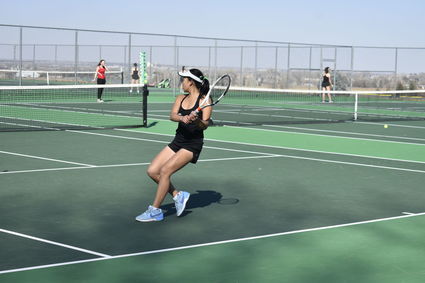 If ever there was a good time for a loss, Niwot’s narrow 4-3 defeat at the hands of defending Class 4A state champions Cheyenne Mountain on March 17, was it, according to head coach Aimee Keronen.

With four of the seven matches lasting three sets, her team not only showed it can compete with the top teams in the state, it gave the players some keen insights for beating the nine-time champs in May.

“I think it was ok to lose some of those three-set matches, because our girls are hungry now,” Keronen said. “We see where we’re at and what we need to work on. If we hadn’t played them this early, we might not have seen the kinks.”

Not that there were a lot of kinks to see, even in the loss. At No. 1 singles, Niwot freshman Lucy Lu came back from a 6-4 defeat in the first set to beat the voluble Morgan Hall 6-1 in the second set, only to fall 6-4 in the third to the two-time state semifinalist, who is considered among the top contenders for a state title. Keronen chalked the loss up to nerves and said she’s not worried at all about Lu’s resilience.

“I think Lucy was a little nervous because it was her first intense high school match,” Keronen said. “It’s different playing high school and the national circuit. There’s a lot more pressure because you feel like you’re winning for the school, not just yourself.”

The No. 2 singles match also went three sets, as Niwot’s Taylor Thulson battled defending champion Corey Patton Lossner for nearly three hours, finally falling 7-6 (9-7), 3-6, 4-6. Thulson, who relinquished the No. 1 singles slot to Lu this season, is thrilled with her team’s performance in the early going.

Niwot kicked off the season on March 7, with a 6-1 win over 3A state runners-up Colorado Academy, followed by a 7-0 win over Valor Christian, which placed third in last year’s Class 4A tournament.

“We smoked Valor yesterday, and we’ve never done that before,” Thulson said after the Cougars’ third victory of the year, a 7-0 win over Centaurus on March 14. “It was amazing for our team confidence.”

Senior Julia Pentz posted the lone singles victory for the Cougars on Saturday against Cheyenne Mountain, a 6-3, 6-3 win over junior Ariana Arenson, who has won consecutive doubles titles for the Indians. Pentz improved to 4-0 on the season, and her coach sees a clear path for her in the post-season.

“I have all the confidence in the world in her heading into the State tournament,” Keronen said. “I’m optimistic she can grab that title.”

Keronen doesn’t anticipate making any major adjustments to her lineups, even with the losses at No. 1 and No. 3 doubles.

“I like how everyone played together, we just need to fine tune some things,” Keronen said. “Some simple, basic doubles stuff like the cross-court return, making first serves.”

The Cougars played Northridge on March 20, they are beginning a two-week break. Niwot returns with three consecutive matches in the first week of April, against Thompson Valley on the third, Broomfield on the fourth and cross-town rival Silver Creek on April 5. Keronen is hoping to use these back-to-back-to-back matches to start honing her team for the anticipated rematch with Cheyenne Mountain at State. 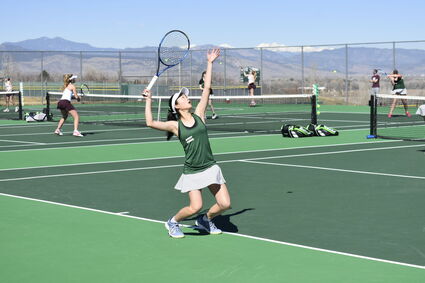 “A lot of what we have to work on is mental,” Keronen said. “The more matches, the more experience under their belts, the more confidence they’ll gain. We’ll give them the battle. We want to win the war.”