Student of the Week: Liam Benson 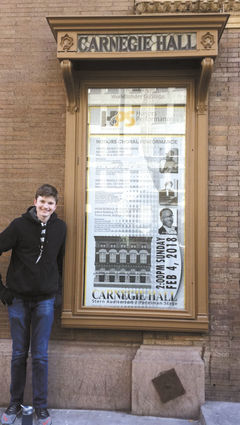 Having their students perform at Carnegie Hall even once is a lifelong dream for many choir directors, so imagine Niwot High Choir Director Laura Marshall’s excitement when it happened to her twice in February.

Nominated for the prestigious group by Marshall, Benson submitted an audition tape last summer and was selected to sing first bass in late fall, an honor his teacher feels was heartily deserved.

“Liam is a fantastic musician,” Marshall said. “He sight-reads music very well, and has the natural instinct when it comes to performing.”

Benson has loved singing “as long as I can remember.” An aficionado of chamber style music and vocal jazz, he has been active in school and district honor choirs since his elementary days, and is also active in musical theatre. Last fall, he starred as Underling the butler in Niwot’s production of The Drowsy Chaperone.

“He is a leader in choir,” Marshall said. “He has been in the top choirs at Niwot since his freshman year, has had large roles in all of the musicals,”

In the weeks before the early February performance, Benson learned six brand new choral pieces that spanned “a very broad range of difficulty.” Among his favorites were “Chariots” and “KwaMashu,” a traditional African song.

“They ranged from a very simple, repetitive piece to a very fast-paced piece that filled every inch of sheet music,” Benson said. “That was a difficult one.”

Once in New York, Benson and the choir had three days under the tutelage of renowned conductor Dr. Jeffrey Redding to perfect the material, which they did during twice-daily three-hour rehearsals. Benson also assisted Redding with choreography for the choir’s performance of KwaMashu.

“Dr. Redding was absolutely incredible at directing us and teaching us the music,” Benson said. “He was also very, very good at making us laugh.”

The choir’s rehearsal schedule didn’t leave much time for sightseeing or spending time with family, but Benson and the group did get a chance to see The Lion King on Broadway and take a tour of Times Square.

Benson admitted he was a little daunted leading up to the final performance, but Redding’s charm and the camaraderie of the choir ultimately put him at ease.

“Carnegie Hall is a very gigantic place to perform in,” Benson said. “You look up and there are three or four balcony levels and they’re just jam-packed with people, so that’s a little intimidating. The rehearsals were always very fun, so it wasn’t exactly a stressful time.”

Benson returned from New York not only with a great story, but also with a new vision of his future.

“After Carnegie, I think I finally decided that I would like to follow suit with Laura Marshall and Jeffrey Redding and hopefully become a choir director someday myself,” he said.

He’s wasted no time in getting started. Inspired by his time with Redding, Benson will direct Niwot’s Evenstar Choir in a performance of KwaMashu in its final concert of the year.

“More recently he has been seeking ways to lead,” Marshall said. “His time in New York gave him even more confidence and leadership skills.”