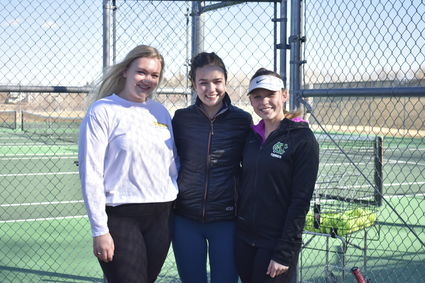 Photo by Jocelyn Rowley Seniors and co-captains Erin O’Neill, Julia Pentz, and Taylor Thulson head a deep lineup that is poised to challenge for a state title.

Niwot girls tennis coach Aimee Keronen admitted she’s feeling some pressure this season. Armed with a talent-laden lineup that includes a nationally-ranked freshman and eight returning State qualifiers, the Cougars may finally have the depth to challenge perennial powerhouses Cheyenne Mountain and Kent Denver for the Class 4A State title in May. The key, she said, will be to keep the youthful team working well together all season long.

“The team on paper is capable of winning it all this year,” Keronen said. In 2017, Niwot took sixth overall at State, up from eighth in 2016. “It’s going to depend on how we handle things mentally, because we’re kind of young. A lot is on me, getting these doubles teams right. It’s a lot of stress because you have to get the right mental fit, the right personality fit, and the right game together. If we can get all that right, we definitely have a chance.”

Luckily, Keronen has more than just talent working in her favor this year. Though the team does skew young — six of the top 11 are freshman or sophomores — they are surprisingly seasoned, competition-wise. Ninth-grader Lucy Lu is a veteran of the USTA junior circuit, and is currently ranked second in Colorado in her age division and 96th nationally. She will play No. 1 singles for the Cougars this season. Joining her in the top-11 are fellow ninth-grader Emily Creek and sophomores Lily Sieben, Maedee Trank-Greene, Tehnley White, and Catherine Xiao, three of whom (Sieben, Trank-Greene, White) played in the State tournament as freshmen. Creek is no stranger to State competitions herself, having just won the 2018 individual State slalom title skiing for Nederland.

Keronen is clearly enthusiastic about the boost Lu will give her team this year, both on the court and off of it. She also dismissed concerns that Lu’s youth might be a factor in post-season competition.

“She’s the whole package,” Keronen said. “Her ground strokes are solid. She’s tough as anything. She never gives up. She’s a fighter, and you can’t ask for anything more in a tennis player.”

Keronen is also optimistic about title prospects for seniors Julia Pentz and Taylor Thulson, who will fill the other two singles slots for Niwot this season. Both veterans of the “brutal” Class 4A No. 1 singles bracket, Keronen said the co-captains were “most excited of anybody” about having Lu competing in the top spot this year.

“Not only does it make our team better, but it also gives them a better chance at running for a State title,” Keronen said. “They’re happy to let Lucy take that position over.”

Senior Erin O’Neill and juniors Rachel Drake and Sreeya Kairamkonda round out the varsity squad. O’Neill and Drake will also serve as co-captains with Pentz and Thulson.

So far, Keronen has been impressed with her team’s chemistry, and the way the juniors and seniors are mentoring the newcomers.

“I like our mix,” she said. “These core seniors that have been a part of our varsity for four years now, and we have this young group coming in and it’s just a good mix. The team seems to really mesh so far.”

Keronen will be assisted this year by her husband, boys head coach Miikka Keronen, and Lisa Pentz, who heads up the JV team. The Cougars kick off their season on March 6 against last year’s Class 3A runner-up Colorado Academy. They make their home debut against Valor Christian on March 12, and their Northern League debut on March 13 at home against Centaurus.