The verdict is in: Niwot’s Mock Trial team is State-bound 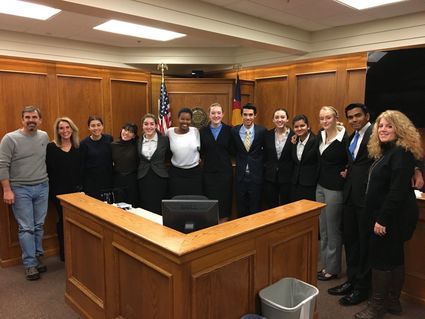 With the win, Niwot secured a berth in the upcoming State Mock Trial Tournament, scheduled for March 9-10 at the Weld County Justice Center in Greeley. A win there, and the team earns a trip to the national tournament in May.

“They just blew our minds at regionals,” attorney-coach Erika Grant said of the upset victory. “We’re a relatively new program at the school, just four years in. For us to come back this year and not just make it to State but win Regionals is a really big deal.”

Sponsored by the Colorado Bar Association, the High School Mock Trial Program is a legal education program where teams argue both sides of a fictional legal case before an actual judge in competitive rounds scored by attorneys and paralegals. Each “side” consists of three attorneys, and three witnesses who are subject to direct or cross-examination. No verdict is delivered, but teams score points based on their mastery of the Rules of Evidence and trial procedures, as well as character portrayals and argumentation.

In this year’s case, The People v. Bailey Forsythe, the defendant stands accused of murder in the drowning death of spouse Corey Forsythe. Initially ruled an accident by the coroner, Corey’s death is determined to be a murder after an insurance investigator uncovers enough evidence to cast doubt on Bailey’s story.

Grant, a CU Law graduate and former litigator, serves as head coach and technical advisor to the Niwot team along with Brad Hall, a graduate of the University of Nebraska’s Law school who is currently with Longmont law firm Lyons Gaddis. Counselor Aimee Brown is the faculty advisor for the team. The team also received assistance from the Boulder County Bar Foundation, which chipped in with a grant to help offset tournament registration fees.

The coaches assist both sides with all aspects of trial preparation, including handling evidence, crafting opening statements and closing arguments, and preparing witnesses, which involves an element of acting.

Serving as prosecuting attorneys for Niwot this year are Clark, senior Tori Sexton, and junior Shreya Sharma, while sophomores Rumi Natanzi, Braden Wade, and Carolyn Qiu are the prosecution’s witnesses. For Clark, this year’s case is even harder than usual due to a “gender challenge” added by the CBA, which allows the defense to portray defendant Bailey Forsythe as either male or female, changing salient details of the evidence.

“Basically, they thought it would be fun to give us two completely different fact patterns contingent upon whether the defendant of the case is male or female,” Clark said. “For our defense it’s not a problem because they stick with whatever the gender of their defendant is. For the prosecution, however, we have to prepare two different cases. In my little trial folder I take to competition I have two direct examinations, two cross examinations, and two closing arguments.”

Defense witnesses are juniors Jacy Stampes and Genesis Kadebe, along with Sexton, playing a second character. Kadebe, an attorney during her first two years with the team, said it was hard to take on a more passive role in this year’s competition.

“I like being a witness, because it’s more laid back and there’s not as much work,” Kadebe said. “But, I’m a control freak, so for me, going from an attorney who can control the situation to where you just have to sit there and just be quiet [and] let them handle it themselves is really hard, especially when you know what can help.”

Serving as defense attorneys for Niwot this year are sophomores Amay Pukale, Jaden Schrock, and newcomer Reagan Wills, who has impressed her coaches and outside observers alike with her shrewd arguments on behalf of the defense.

“Reagan gave a closing argument at regionals that a sitting judge said out of all of the closing arguments he saw during that competition, hers was the best,” Grant said. “And she just turned 16.”

Both Clark and Grant agreed that the caliber of talent on this year’s team is especially impressive considering its relative youth. Members also hail from diverse social and academic backgrounds, another factor both Grant and Clark cited in the team’s success.

“A few of them come from speech and debate, some from musical theatre, some from sports, some from band, visual arts, yearbook,” Clark said. “Having lots of different perspectives on how to tackle a problem or how to present oneself in front of a court is extremely helpful.”

Grant also singled out “rock star” Clark for her outsized contributions to this year’s case, and said the win over Fairview wouldn’t have been possible without the talented future-lawyer’s leadership. 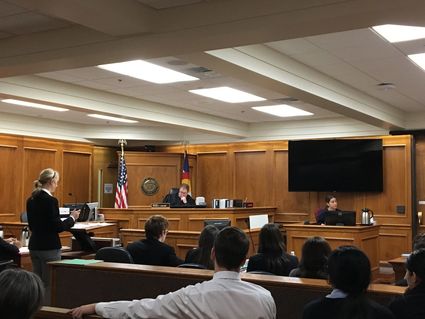 Courtesy Photo Niwot students Reagan Wills and Victoria Sexton in the courtroom during the Mock Trial regional competition on Feb. 10

“Kynzie Clark is one of the most impressive young women that I’ve known,” Grant said. “She has a work ethic and an ability that far surpasses her age, and I have no doubt in my mind that whatever Kynzie tackles in the future, she’ll be successful.

In the week before the state tournament, the coaches are having the team polish their characters and focus on “little technicalities” that impress the scorers, such as citing specific rules of evidence.

“These rounds will turn on who doesn’t get flustered, and the ability of the witnesses to really ramp up their performances,” Hall said. “That really drives these trials at state.”

“As a team, we are confident but not complacent.” Grant said. “These students have worked extremely hard and they continue to work hard. They deserved the regional win and it will be exciting to see what they bring to state.”