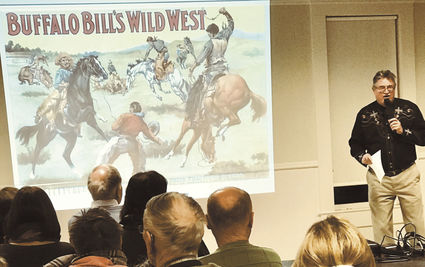 Photo by Karen Copperberg As the first 2018 speaker at the Niwot: Then & Now lecture series, sponsored by the Niwot Historical Society, SteveFriesen entertained the crowd with many anecdotes and details of the life of Buffalo Bill.

An outstanding lecture on the life of William F. Cody by Steve Freisen was enjoyed by a crowd of at least 120 people on Wednesday, Feb. 28 at the Left Hand Grange in Niwot. As the first 2018 speaker at the Niwot: Then & Now lecture series, sponsored by the Niwot Historical Society, Friesen entertained the crowd with many anecdotes and details of the life of Buffalo Bill.

Friesen had been the director of the Buffalo Bill Museum and Grave on Lookout Mountain overlooking Golden for 21 years before retiring last October. His book Buffalo Bill: Scout, Showman, Visionary, was a sellout.

Friesen noted that Buffalo Bill received a Congressional Medal of Honor for being an Indian scout during the Indian Wars and was the first to refer to the "Indians" as "the Americans." 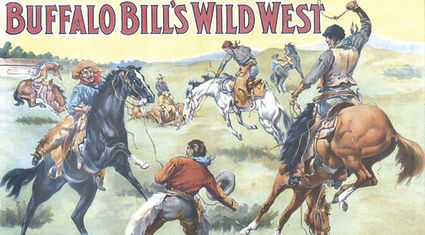 At one time Buffalo Bill’s Wild West Show had 640 people, including over 200 performers. Cody befriended many Native Americans, Chief Sitting Bull among them. He had Pawnee and Lakota working together, although the two tribes did not get along. He was also the first to introduce Mexican food and subsequently opened a Mexican restaurant in New York City, when he performed at Madison Square Garden in 1886.

Yet in 1893 when Cody brought his show to Chicago for the World's Columbian Exposition, he was not allowed inside the gates, as the 600 performers and support staff were considered "uncivilized" – even though the show managed to entertain an average of 16,000 people per day.

With profits from this grand show, Buffalo Bill founded the city of Cody, Wyoming. To this day, controversy follows the decision to bury him on Lookout Mountain in Colorado.