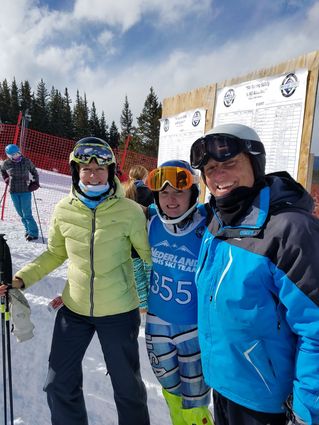 Courtesy Photo Emily Creek with her parents, Mark and Linda Creek, after her winning run in the 2018 CHSAA Slalom championship race.

While waiting on the back side of Ski Cooper to take her final run in the girls slalom race at the 2018 CHSAA Alpine Skiing Championships on Feb. 23, Niwot freshman Emily Creek wasn’t sure what to think. Though she was racing on one of her favorite courses and held the lead by nearly a full second, the ninth-grader was afraid she would lose her competitive edge if she allowed herself to relax even a little bit.

As she waited for 14 other competitors to take their runs before her, Creek decided to stick to a tried and true strategy.

“I was trying to make sure I didn’t go into that complacent mindset,” she said. “I just pushed myself super-hard all the way down.”

Luckily for Creek, that was all the strategy she needed to claim the day’s fastest time and with it, the 2018 individual State slalom title.

“I wasn’t really shocked, but honestly, I just didn’t know what was going on,” Creek said of her initial reaction to the win. “I was nervous but I was also happy at the same time.”

Creek’s two-run time of 1:11.65 was more than a full second faster than runner-up Amber Eliott of Steamboat Springs (1:12.89) and more than two seconds faster than Devan McSwain of Aspen (1:13.80), who finished third. Creek’s win helped boost the Nederland girls into sixth-place overall in the team slalom competition, and ninth overall in the final team standings.

On hand to support Creek in her inaugural state competition were her parents, Mark and Linda Creek, who were just as anxious as their daughter as they watched the final run.

“As a parent, it was stressful during the second race,” Mark said. “A second is a lot of time, but anything can happen, especially a DNF (did not finish) due to a missed gate or crash… My wife and I just had to trust that she knew what to do. After all, this is what she is always training for.”

“At most races you can see the times as they are happening on your cell phone, but at Ski Cooper there is no cell coverage,” he continued. “So after Emily finished we had to ski down to the race board and see her time. We skied down and she gave us the #1 sign with her hand. It was great to find out that she had won it all.”

Creek’s State title bid redeemed a lower than expected finish in the giant slalom (GS) race the day before. After a switch to shorter radius skis to combat a “tight” course, Creek skied to a disappointing 35th place after the first run, her slowest finish all season by a wide margin.

“I don’t think I was there mentally in the first run,” she said. “I had a long chairlift ride talking to myself after that.” 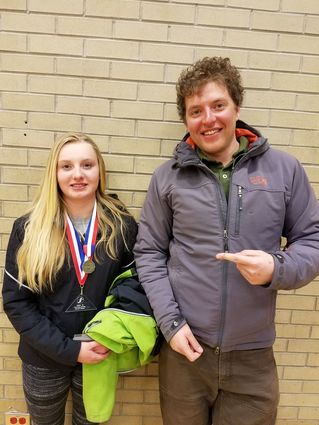 Courtesy Photo Emily Creek with Nederland coach Jonathan Damon after her winning run in the 2018 CHSAA Slalom championship race. Creek’s father Mark credited Damon for supporting Emily through both the club and high school seasons, and for giving the Emily and the Nederland skiers “a great experience at state.”

“On the second run, she switched back to her longer radius skis and came out more aggressive and finished tied for ninth,” her father said. “Emily did beat Alex Cregan at the GS race at Eldora earlier in the year, so maybe there is potential for next year.”

Creek is looking forward to her reign as State slalom champion, even if she will not get much time to bask in the glow of her win. With junior nationals coming up in March, she will be back at Eldora with her club team almost immediately. She is also hoping to compete for the Niwot girls tennis team when their season gets underway on Mar. 6.

As for high school skiing, Creek said she is already looking forward to picking up where she left off next year.

“I’ll be back next season, too,” she said. “I have to come back and defend my title now.”