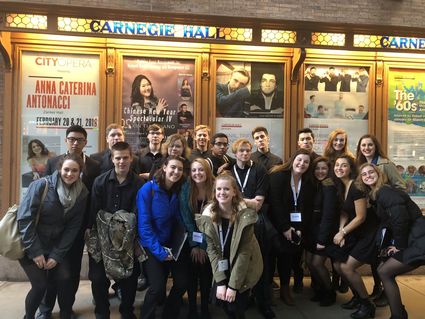 Making music on stage at Carnegie Hall is a gold standard for performance excellence. Earlier this month, 20 Niwot High School (NHS) students did just that. This is the fifth year that NHS has hit the big-time in NYC by taking part in a trip arranged through Manhattan Concert Productions.

NHS Choir Director Laura Marshall said the school is invited back each year because NHS students have proven they are strong, excellent singers.

This year’s trip was chaperoned by Marshall, along with Principal Eric Rauschkolb, and several parents. Comprised of 12 seniors, 3 juniors, 4 sophomores and one freshman student, the NHS students became part of a chorus of 200 singers from across the nation.

“I was beaming with pride when I saw each of our students performing on stage,” Rauschkolb said.

Working with Kevin Stites, a prominent Broadway conductor, and 12 well-known (and many Tony awarded) Broadway stars including Sierra Boggess, Michael Arden, Tony Yazbeck, Laura Osnes, Lea Salonga, from such famous shows as Les Miserables, Miss Saigon, and The Little Mermaid, students were in the midst of incredible talent and expertise.

“This trip is so huge for our students,” Marshall said. “Many of the students who attend aspire to perform on Broadway, and to be able to experience something of this caliber, at their age, is incredible. They get to work with the top professionals in musical theater. And, as they perform, the expectations for the students are just as high as they are for the professionals. They get to see the amount of dedication and rigor that these people put into their profession and are so inspired by the trip. It is very visible in their performances every year as we come back.”

Past years’ performances were focused on the songs from a single musical production. This year’s production was a musical revue of pieces from such popular and long running Broadway shows as Titanic, Crazy for You, The Hunchback of Notre Dame and Parade.

“The experience reinforced how much I love performing and provided an opportunity for me to see successful actors working,” senior Orion Zona said. “Being on a huge stage at Carnegie Hall with an audience of almost 3,000 meant that I got to see what performing is like for all of the incredible actors in the show.”

“I learned that being a Broadway performer is by no means easy,” senior Linnea Wolniewicz said. “We had a chance to ask all of the stars questions about their lives and I hadn't realized how much they give up to share their emotions with an audience each night. They often go on vocal rest and can never spend nights out with friends. However, the passion they all had for music was inspiring and encouraged all of us to be more like them.”

While not all of the students want to be performers, this trip still was impactful for them. Two of the students had never been on a plane before. And for each, experiencing New York City, and singing in a large chorus, in one of the world’s most prestigious and historical venues, was powerful.

“My favorite part of the trip was being able to listen to all of the performers in the concert because it gave me a sense of the quality that is expected for Broadway,” NHS junior Penina Eisenberg said. “They all sounded so amazing and I really enjoyed it!”

Students were selected for the trip on a first come, first served, basis requiring registration and a down payment to hold their spots many months ago. The singers prepared for the performance with rehearsals after school, meeting about a dozen times before heading to NYC.

“Usually they send materials around the holiday break,” Marshall said of the songs they needed to learn pre-trip. “This year we got them mid to late January, so we had them only a month and a half in advance.”

Once they arrived in NYC, the students also rehearsed several times with the entire ensemble, including the professional orchestra that accompanied the chorus.

The visit to NYC included some classic highlights. As a group, they stayed in a hotel right on Times Square, just steps from famous theaters. They also visited Madame Tussaud’s Wax Museum, and saw two Broadway shows – Come From Away and Wicked. The entire group went on a tour of the NBC studios and went to the top of Rockefeller Center. Breaking off into two groups, some students toured Central Park while the other group took the Staten Island Ferry to the Statue of Liberty. 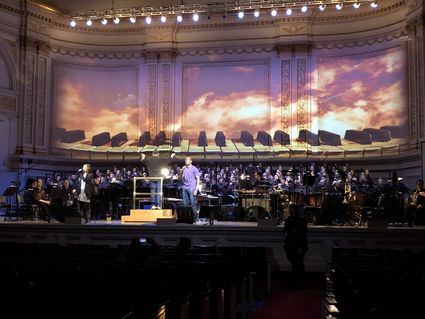 “While preparing for the trip, one of the hardest things to keep in mind is that you’re going to perform as a professional,” senior Olivia Herring said. “Being a high school student it’s a huge deal to perform for thousands of people at a place like Carnegie Hall, and it is a strange feeling to walk onto that stage, or even in the rehearsal room and be seen not as a child or a student but as a professional musician who’s coming in to contribute something, and there’s no way to prepare for that, but I always try.“ This was Herring’s third time on the class trip to NYC.

“All around the world, our [music and arts] departments are losing funding and students,” Herring said. “Creativity should never be diminished or put second to athletics, or even academics. Without the incredible arts department at Niwot, this trip would not be possible and I would say with certainty that it has shaped me into the disciplined and driven musician I am today. The experiences I have had on these trips will be held near and dear to my heart for the rest of my life.”