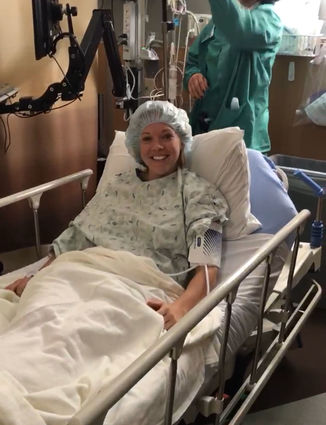 Courtesy Photo Jackie Zampella just before heading into surgery. Zampella anonymously donated her kidney to save a young man with renal failure in Oregon.

Thirty one year old Gunbarrel resident Jackie Zampella didn’t personally know anyone who had kidney failure, but she knew she could save a life by offering one of her healthy kidneys to someone in need. What she actually did was save four peoples’ lives.

Nationally, there are 127,374 people on the U.S. organ transplant waiting list. Every 10 minutes another person is added to that list. Twenty-two people pass away each day, because they did not get the organ they needed. But, the good news is that each day over 90 organ transplants are performed.

In Colorado there are 2,600 people awaiting a lifesaving transplant and nearly 75 percent of them are in need of a kidney.

To Zampella those facts meant, “someone on the list could die tomorrow and I could do something to change that. It was a no brainer.”

The tipping point for Zampella was her aunt dying from pancreatic cancer in her 50’s, leaving behind a husband and two children. Losing a family member so young and recognizing the impact it had on her family drove home how devastating critical illnesses can be.

Zampella’s empathy turned into action and her actions would change the course of many people’s lives.

Zampella, an event specialist whose job it is to raise funds for St. Jude’s Children’s Research Hospital, moved to Colorado from California two years ago. She lives the quintessential Boulder County healthy, active lifestyle – belonging to a CrossFit center, playing and coaching soccer, and climbing fourteeners.

To follow up on her desire to become a kidney donor, Zampella went to University of Colorado Hospital (UCH) in Denver, the area’s largest transplant facility. There she learned about the donation process and went through extensive exams to determine if she was a good candidate. Testing involved drawing a multitude of blood vials, chest and renal imaging and a psychological evaluation.

“Because most people don’t give their kidney to a stranger,” Zampella said, “they want to be sure you’re mentally fit and doing it for the right reasons. Also, I’m not a needle fan. There were more needles than I could count. But it was an interesting experience and I had such great tests done. UCH was incredible.”

Every step of the way, the transplant coordinator and UCH experts checked with Zampella to be sure she knew what she was getting into and wanted to continue with the donation. They made it clear she could step out anytime if she changed her mind.

Her parents’ reaction to her decision was one of great concern and they participated as best they could from New Jersey while Zampella moved down the path of becoming a donor.

“We came up with 40 or more questions to ask them when I went to UCH,” she said. “My parents and I skyped after every meeting at UCH and every step I was going through. They were very much a part of the process.”

Ultimately, her mother and father were very supportive and proud of her decision. They flew to Denver for the surgery and stayed for a week to help her convalesce.

“Heading into surgery, I didn’t think I would be nervous, but I was. Saying goodbye before being wheeled into surgery and seeing my dad teary-eyed was hard,” Zampella said.

Initially expecting to donate a kidney to one person, Zampella was offered the opportunity to make her donation go even further by starting a chain donation. This type of donation works when an anonymous donor (in this case, Zampella) is matched with a recipient who has someone on their behalf who is not a match (perhaps a spouse whose blood type is different) who is willing to give a kidney to another patient who also has friend or family member who will offer their kidney.

The sequence can lead to a ripple effect that travels across the country.

On Nov. 8, 2017, Zampella’s kidney was removed, put on ice in a cooler with a GPS unit which was then boarded on a commercial flight to Oregon, where it was transferred to the recipient’s hospital and was reattached. That act resulted in a total of four transplants ensuing.

Forty-five percent of organ transplants are needed by patients between 50 and 64 years old. But Zampella’s recipient was only 21 years old. He was at end stage renal failure and in danger of passing away in short order.

Her hopes are to meet the recipient at some point, and protocol allows that to happen if both parties are willing. For now, she knows only a few general things about him. At 10 weeks after surgery, she was allowed to send a letter through UCH which sends it on to the hospital where the recipient’s operation took place. If he is agreeable to communicating (and for some recipients it’s not always comfortable to do so), they can communicate directly.

“The hardest part of this has been going three months with little to no activity,” Zampella said. “Anyone who knows me knows that was the worst thing to ask me to do. But it allowed me to change my perspective on taking care of myself. I read more and settled my mind in other ways.”

Dr. Thomas Bak, Zampella’s surgeon, has performed over a thousand transplants. Zampella was in the surgery room for 72 minutes.

“Days go by now and I forget about the surgery, until I see the scar on my belly,” she said. “The commute to Denver for work was not fun at first. Sitting up that long and driving in stop and go traffic used my core a lot more than I expected. “

As of last weekend, Zampella was given the go-ahead to work out again, and she has already gone hiking and played soccer.

Zampella’s inclinations toward organ donation aren’t over by any means though. She’s begun speaking at colleges and high schools to educate students about the need for organ donations – living and after death.

She’s spoken in philosophy classes at Harvey Mudd College and Claremont College in California and at several Colorado high school health and driver education classes. Philosophically, the discussion always leads to why you would give an organ to someone you don’t know.

Zampella likes to pose the question, “Would you give your mom a kidney?” Inevitably the response is “Yes, because she’s my mom.” Then Zampella widens the circle a bit and asks “Would you give a kidney to a cousin?” The answers are yes again. And it goes on… For her, she didn’t see the difference between a family member and someone else who needed the organ.

The often-repeated “what if” questions relating to future risks of whom in your inner circle might need your kidney don’t resonate with her since they are pure conjecture and she has not met anyone with kidney failure yet in her lifetime. It was the concept of now that mattered to Zampella, and that someone would die needlessly without her helping them.

Zampella also likes to be sure people are aware of and sign up for the organ and tissue donation registry on drivers’ licenses and state issued ID cards. Anyone who has either of those cards, regardless of age, may register to donate upon his or her death. An individual willing to donate his or her organs and tissues can have the impact of saving eight lives.

In Colorado more than two-third of driver’s license holders have signed up for the registry. However, only three in a thousand people die in such a way that transplanting their organs, eyes and tissue is viable. 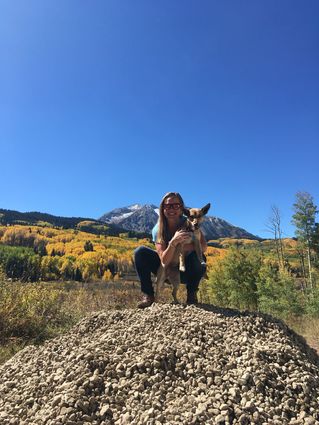 Courtesy Photo Kidney donor Jackie Zampella and her dog Reese out for a hike.

Someday Zampella hopes to find out more about the recipient of her kidney and follow how he is doing. She does know that within a month of surgery his critical kidney function numbers were well within the healthy range.

As for her own health, she’s looking forward to a hike up Long’s Peak this summer, making that her fifth conquered fourteener. And she plans to continue spreading the word about organ donation and how to help others.

To find out more about being a living donor, contact the University of Colorado Health Services (UCH) Transplant Center at 720-848-0005. For more general information about becoming an organ donor go to http://www.donoralliance.org. To learn more about registering to be an organ, eye and tissue donor through driver’s licenses and state ID cards, go to http://www.donatelife.net. If you have a heart on your license, you are already registered.