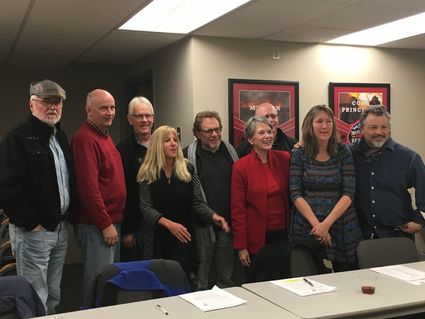 On Feb. 6, the Niwot LID Advisory Committee considered five funding requests, got a sneak preview of the NBA’s 2018 budget and heard after-action reports for two popular events from last year. They also said goodbye to AC members Tony Santelli and Howard Treppeda, who will be stepping down at the end of the month when their latest five-year terms expire.

Treasurer Harris Faberman led off with an update on the District’s 2017 finances. The LID collected $13,253.70 in sales tax revenue for November, down just slightly from the same period last year ($13,872.64).

Boulder County interim liaison Mark Ruzzin reported that the LID budget amount for 2018 had yet to be finalized, but would probably be the same as in 2017 ($133,000). Funds collected which exceed the budget are added to the capital reserve, and can be accessed later as needed.

Appearing on behalf of the Niwot Historical Society, Kathy Koehler and Felicia Santelli presented the evening’s first funding request, for $5,000 to beautify the streetscape surrounding the Fire House Museum.

The Museum recently attracted attention when the 1910 Fire Cart, which sits near the entrance, was added to the Colorado Collections Connections’ top 10 significant artifacts list for 2017. With renewed interest in the site, the Niwot Historical Society hopes to “enhance its visibility” to passersby, who often overlook the tiny structure tucked next to the Left Hand Grange.

“We want to be a more vibrant and vital part of the Niwot historic business district,” Koehler said.

The Historical Society’s tenative plans for the space include enhanced landscaping around the building, a wrought iron fence and a bench. They are also planning to wire the Museum for electricity, and install a Little Free Library. The Historical Society projects total costs of $12,000 to $14,000, most of which will come from other fundraising efforts.

Board members Laura Skaggs and Jim Eastman questioned using LID funds for Museum-specific upgrades (e.g. signage and electricity), instead proposing the $5,000 be reserved for more general enhancements to the “plaza area” facing 2nd Avenue. The request was approved unanimously after that condition was added.

Next up was Chuck Klueber with the Niwot Business Association Streetscapes committee, who requested $3,500 for anticipated maintenance and repair costs in the coming months.

The fund will cover costs for various projects around town, including upkeep on the lamp posts along 2nd Avenue and labor to install seasonal banners. This request was also approved unanimously, as were his next two requests, both relating to the 79th Street Connectivity Project (aka Sculpture Park).

The first was for $1,550 to rent signs and barriers in order to comply with a county-mandated “Pedestrian Control Plan” around the construction zone, and the second was for $3,100 for annual costs associated with landscape maintenance of the area.

The night’s final request came from LID member Bruce “Biff” Warren, appearing on behalf of the Niwot Cultural Arts Association (NCAA). He asked for $2,453.61 to cover the projected non-alcohol related expenses for the fourth annual Let’s Wine About Winter event, scheduled for Feb. 24. This was also approved unanimously, though Warren abstained.

Moving on to new business, Economic Development Director Catherine McHale and NBA Treasurer Dayna Roane presented the NBA’s 2018 budget, with projected expenses of $191,235. About 75 percent of those anticipated 2018 expenses will be requested from the LID, including $66,150 for infrastructure items (such as Cottonwood Square “ambience” and new trees along the south side of 2nd Avenue), and $52,060 for marketing and events.

Much of that, explained McHale, will go towards a new marketing campaign emphasizing Niwot’s “niche” in the region, with a more specific focus on dining, wellness, hiking, and biking. The campaign will also seek to entice visiting concert-goers into other local establishments.

“This year, I really want to build on the message of this uniqueness,” McHale said. “And to really extend the interactions that people have when they’re coming to town for events. How can we maximize people visiting the town for events and pull that benefit through the whole of our business community if possible?”

There was also quite a bit of old business to discuss. Howard Treppeda provided a thorough wrap-up report for Jazz on Second Ave, a day-long music festival held last September. The 2017 event generated a modest net profit, which is being used to fund music education in schools. Recent efforts include demonstrations by the music education group Vail Jazz Goes to School at Niwot and University Hills elementary schools.

In more old business, Warren presented the 2017 Rock & Rails season end report. In 2017, the 14-week long event generated a profit of just under $14,000, which will be split evenly between the NCAA and the NBA, co-managers of the event. The concerts generated more than $100,000 in alcohol sales, and averaged revenues of $7,155 per concert, up nearly $900 per night from 2016. Eighteen organizations raised $15,386 in tip jar proceeds, and the Niwot volleyball team earned another $1,500 in tips for their bike valet service.

The night’s final item came from Ruzzin, who had an update on the candidate review process for upcoming vacancies on the LID AC. New five-year terms for a Niwot Business Association (NBA) representative, a Niwot Community Association (NCA) representative, a residential representative and a business community representative begin on March 1, 2018. The County Commissioners are reviewing applications for the four slots, and will contact the candidates to schedule interviews in late February. They will then make their appointments before the new five-year terms begin.

Eleven candidates have filed applications with the county to fill the spots. Satir DeMarco (resident) and Laura Skaggs (NCA) have both applied to renew their terms. Six candidates are vying for the resident slot—Kathy Koehler of Morton Road, Scott Firle of Meadowdale Drive, Andrew Lerner of Legend Ridge Trail, Christine Lebor of Legend Ridge Trail, Bruce Rabele of Old Town, and David Rechberger. Local business owners Adam Robinson of Seven Wealth in Cottonwood Square and Rabeler have applied for the upcoming business vacancy, while Koehler and Scott Brown have also applied for the NCA spot. Finally, the NBA has designated Anne Postle of Meadow Farm Road to fill the NBA representative position, left vacant by the departure of Tony Santelli, who is term-limited. Treppeda declined to renew his term as business representative, and will instead focus on growing Jazz on Second Ave.

Warren then provided a quick update on the parking lot land purchase, which will need to undergo Boulder County Special Use Review before any further development can move forward. Santelli agreed to have the NBA initiate that process with the County.

Koehler then offered a rare public comment, thanking Klueber and the NBA for the lighted snowflakes in last year’s holiday decorations.

After adjournment, members thanked Santelli and Treppeda for their service to the community during their terms, and posed for final pictures.

The Committee will meet next at 7 p.m. on Mar. 6 at the Mountain View Fire Station.