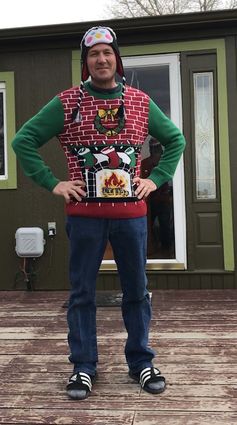 Photo by Vicky Dorvee Chuck Rodgers exudes his fondness for the holiday season by wearing a penguin hat and lit up Christmas sweater.

Chuck Rodgers’ personality emits enthusiasm, which is precisely what you would imagine from the creator of one of the grandest holiday light displays in the area. His creation is the resplendent colony of lights on the crest of the hill on 79th Street between Gunbarrel and Niwot.

The Rodgers family has been on this stretch of homesteaded land for nearly five generations, starting with his great grandfather. His parents live two doors to the south of him and his sister, a cousin, and an uncle live on adjoining properties. But his house is where the magic happens every December.

What started in the late 1980’s as a reasonably sized seasonal project for his family to enjoy has grown into a full-blown three-week “system” of putting up lights for the public to delight in. He even purchased a cherry picker to help him hang lights on the trees.

Rodgers’ eight children and six grandchildren have been spectators to and occasional helpers with the project. The grandkids especially love to direct cars when the driveway fills with traffic.

But mostly, the high wattage presentation is Rodgers’ gift to the community. Ten years ago he starting encouraging gawkers to drive onto the property and be in the middle of the merriment. And, in the last two years, Rodgers has amped up the power of his giving by raising money for Longmont Meals on Wheels, an organization his father was involved in as a volunteer.

Rodgers raised $900 and 20 pounds of food in 2016. This past Christmas, with larger signage about his charity of choice and two collections spots along the driveway route, he collected coins, $1 to $100 bills, numerous checks and even a cake mix and candles, with a note that they were presents for Jesus’ birthday. When it was all counted up, it totaled over $4,000 as well as 30 pounds of food for the local nonprofit organization.

“His display is incredible and it fits perfectly with the big fundraising event we do every year,’ Karla Hale, Executive Director of Longmont Meals on Wheels, said. “The donations received go directly towards feeding seniors and people with disabilities.”

Rodgers is a 1977 graduate of Niwot High School and he is a first responder to gas leaks for Xcel Energy, where he has been employed for 33 years. For the five weeks his light show is on (Dec.1 until Jan. 6), he’s also the first responder for the mishaps in his electrified yard.

“My biggest nemesis is the wind,” Rodgers said. “The Noel sign was blown completely off and made holes in the barn. The inflatables have flown three fields away.”

He can also be slightly mischievous while he’s doing the repairs. “I’ve been fixing something inside the Santa house at night and put my face up to the window. That definitely surprised people going by.”

“I just really want to thank everyone for their generosity,” Rodgers said when referring to the donations he’s collected. “On Christmas Eve we collected $550 and that was wonderful.”

Hale said, “We truly appreciate Chuck's support and donation to our organization. What a fun and innovative way to raise money for us.”