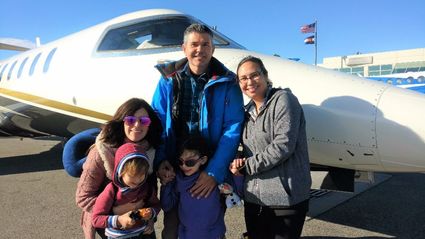 The Makovec-Vitarello family heading to Boston for Mila’s assessment prior to treatment for Batten Disease. Flexjet donated private transportation for the family during the assessment and treatment to prevent the possibility of exposure to germs.

Family hopeful it will improve her condition

Mila Makovec and her family have traveled to Boston to undergo a very promising treatment for the specific gene mutation she has which resulted in Batten Disease. This illness has taken the local girl’s sight, speech, mobility, made her suffer from seizures and now, more imminently, it threatens her life.

While her mother, Julia Vitarello, has been piloting Mila’s Miracle Foundation to bring to fruition a gene therapy treatment for Mila and others suffering from this rare disease, Mila doesn’t have the luxury of time to wait for that drug to be ready.

“Characteristics of Batten are that there is a plateau of symptoms and then around seven to seven and one-half years old, they just fall off a cliff.” Vitarello said.

In November, Mila, her family and friends celebrated her seventh birthday with balloons, cupcakes, music, and a jumble of feelings.

“Mila is good in many ways, which helps keep me going,” Vitarello said. “But she’s having more seizures, it’s very hard to watch, and we’re truly in a race against time now.”

For other children with Batten and similar rare diseases, the work that Mila’s Miracle Foundation has been able to fund is huge. Gene therapy is the quickest, most cost effective and most likely way to battle Batten. And, while it’s still the right option, according to Vitarello, doctors have determined that Mila is not able to wait until the drug they are developing is ready in late 2018.

Owing to the work that Mila’s Miracle Foundation has been doing to raise awareness, the story has received local and even wider traction, allowing a scientist in Boston to get wind of Mila’s case. After additional lab studies and an assessment of Mila’s condition, doctors at the Boston facility unanimously felt confident enough to approve Mila for what they believe could be a life-saving treatment.The ability to urgently undergo this leading-edge treatment is classified as “compassionate use,” a designation that sanctions the administration of a new drug or new treatment when there are no other options for a seriously ill patient. What outcome of the pioneering treatment will be is uncertain, but taking a calculated risk was deemed the best course of action.

In order to head to Boston for her treatment and a subsequent three-month observation, the family needed to raise a total of $700K. There was excellent news prior to the family heading east – two local families and their foundations donated $50K and promised to double donations up to another $83K if the money came in by Dec 20. That milestone was reached.

And their original work toward gene therapy treatment has now met its funding goals of $4M, thanks to local support and the joining of forces with two other Batten fighting foundations.

“We‘ve been checking all of the boxes,” Vitarello said of the very complicated process to perfect the gene therapy drug. “We’ve raised the money, signed contracts with companies for testing and for developing the drug."

On Feb 1, Vitarello wrote on Mila’s Miracle GoFundMe page, “Mila has officially begun her treatment and (is) back to her happy self! There are no words to describe how fortunate we are that Mila has a chance. We are in awe of our scientific team and what they have accomplished. We will continue to post photos of Mila, but the updates will be brief. Keep our Mila bug in your thoughts! We have a long road ahead of us no matter the outcome...”

For now the family is secluding themselves in Boston to prevent any possibility of catching an illness so that treatment is not compromised by immune issues.

There are many more steps in the process before the launch of the drug Mila’s Miracle Foundation has been working on, but with the help of the other foundations, both emotionally and financially, “it seems much more doable,” Vitarello said.

The clinical trial is planned to take place at UT Southwestern Dallas (UTSW), most likely in the fall of 2018. Saving Mila now will not preclude her from the possibility of using that gene therapy or other treatments down the road.