Student-Athlete of the Week: Emily Creek 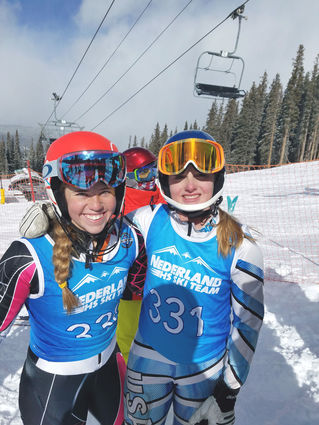 On Jan. 26, Niwot High freshman Emily Creek took first place in the CHSAA girls slalom race at Copper Mountain. With a time of 1 minute 35.66 seconds, Creek beat out more than 70 other competitors for her first high-school win and her third top-ten finish of the season. On Jan. 18, she was just 12 one-hundredths of a second out of first in the girls slalom at Winter Park, and on Jan. 12, she finished fifth in the giant slalom (GS) event at Eldora. With the wins, she is qualified to compete at the upcoming CHSAA State championship races later this month at Ski Cooper near Leadville.

The ninth-grader has been skiing competitively since age five, so joining her high school team was an easy decision, made only slightly less so by the lack of a team at Niwot. Since high school skiing has yet to make its way to St. Vrain Valley, Creek competes with the Nederland High team. Two days per week she leaves school early and commutes there, and then on to Eldora Ski Area, where she practices with the team for several hours. Races are typically held on Thursdays or Fridays at various ski areas throughout Colorado.

Creek sacrifices more classroom time than the average high school athlete, and, as a pre-IB student at Niwot, she’s had to adjust her study habits to accommodate the heavy workload. Fortunately, she has plenty of downtime on her long rides to practices and competitions.

“I go up to Copper on the weekends, and that’s a two-hour drive,” she said. “So that’s four hours right there.”

Creek is excited about competing in the State championships, especially in slalom, but is modest about her title chances.