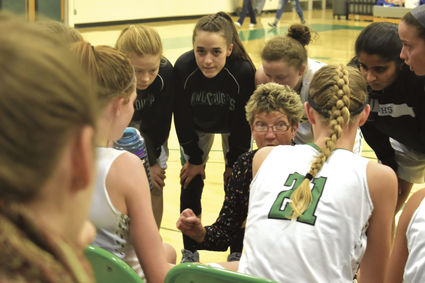 Niwot girls basketball head coach Terri Ward is entering her sixth season in her second stint at the helm.

The red-hot Niwot girls basketball team finally cooled off a bit last Thursday night, falling 45-41 to the first-place Centaurus Warriors after nearly pulling off a late-game comeback. Down by 11 early in the fourth quarter, the Cougars battled back to take the lead with less than 90 seconds to go, but late turnovers gave Centaurus all the chance they needed to put the game away for good.

“We knew we had to play pretty much perfect, and we had some miscues,” Niwot head coach Terri Ward said following the loss, her team’s first since Jan. 6. “We did some things we normally don’t do, but, unfortunately, we’ve been doing them a little bit in practice, and how you practice is how you play.”

The quick-footed Warriors (12-3, 5-1) gave Niwot trouble on both sides of the ball all night long. Seven first-quarter fouls by the Cougars put Centaurus at the line four times, while the Warrior defense effectively neutralized Niwot’s high-scoring seniors, Mary Gillett and Sophie Grant. The Cougars scored just 16 first-half points, and were down six going into the break.

Niwot perked up in the second half, but still had a hard time handling the Warriors in transition. After keeping the score close early in the third period, thanks for a pair of three-pointers by senior Jamie Lee, Niwot gave up seven unanswered points to the Warriors and were behind 35-26 at the quarter’s close.

Though down, the Cougars were not out. Senior Rosie Setter’s nifty left hook at the 6:56 mark sparked a 12-0 Niwot run that put them up 41-39 with 1:21 remaining. During that stretch, sophomore center Marlow Baines scored seven of her season-high nine points, an effort her coach said was a long time coming.

“Marlow played really well. Our guards did a good job of taking the ball to the basket, and she was available and ready and she put it in. She took it upon herself to really do that.”

Baines and Lee led Niwot in scoring on the night with nine apiece, while Gillett and Grant had eight and seven points respectively. Setter (6) and Colvin (2) combined for the other eight. Lee, who is becoming increasingly effective in her role as the team’s senior point guard, had three three-pointers, for a total of five in the last two games.

“I’m getting back into the groove of playing again,” Lee said of her recent scoring success. She sat out her entire junior year with a knee injury. “My shot’s feeling more confident, and my teammates are giving me looks.”

Despite the loss, Ward was pleased with her team’s performance against last year’s Northern League champion.

“They’re a good team,” the coach said. “They do things well. They’re very well coached. They didn’t hit a lot of shots, and I hope we had a little something to do with that.”

“I’m not going to complain about my team,” she continued. “I wouldn’t trade them right now for anybody because they just work so darn hard.”

It’s hard to complain about a team that’s gone 5-2 over its last seven games. After a well-deserved break over the holiday weekend, the Cougars stormed back onto the court last Tuesday night, beating Thompson Valley 55-40. Like their previous game against Mountain View, Niwot was highly effective on both sides of the ball, holding the Eagles to 30 percent shooting (17-of-57) from the floor.

Meanwhile, Gillett tied her season high with 22 points on the night, and went 3-for-5 from the line. She even hit a rare three-point shot, just the third of her career, to put Niwot ahead by 16 at the end of the third quarter. For the second game in a row, she was also a disruptive force on defense while managing to stay out of foul trouble.

“My coach has really taught me that defense spurs an offense,” said the senior guard after Niwot’s third conference win of the year. “So, I’ve been working as hard as I can on defense, and that normally helps us on offense.”

Grant added another 15 points against the Eagles, while Baines and Lee chipped in with six each. Off the bench, Divya Bhat, Elise Crall and Lily Sieben also were effective on defense, and Sieben chipped in a three-pointer in the third quarter.

“One thing I appreciate more than they could ever know and understand is that when we tell them something, they listen and they do it,” Ward said. “It goes from our lips, to their ears and brains and transfers out to their bodies, and that, to me, is amazing. They’re doing the things we’re telling them to do.”

With the split, Niwot moved to 7-7 on the year and 3-2 in the Northern League. The Cougars head to Northridge on Jan. 23 then will have a chance to avenge their early season blowout loss to Greeley Central on Jan. 26. 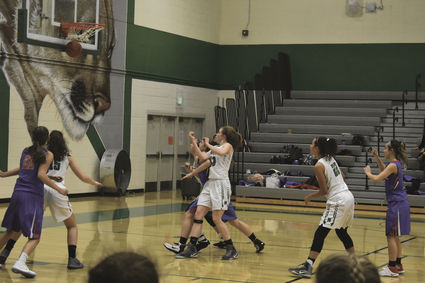 Seniors Mary Gillett and Sophie Grant watch as a Centaurus shot falls for two points. Niwot fell to the Warriors 45-41 on Jan. 18.