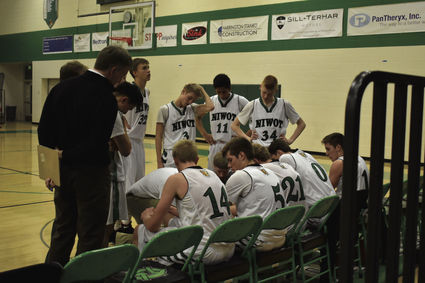 Niwot players listen to Coach Hejl during a timeout against Centaurus on Jan. 18.

It’s been an undeniably rough few weeks for the Niwot boys basketball team.

Since resuming conference play on Jan. 9 against Longmont, the Cougars have gone 0-4, while scoring just 40 points per game, and losing by an average of nearly 32 points. With just nine games to go in the season, the Cougars’ playoff hopes are gone, but head coach Eric Hejl is hoping to end the year on a high note nevertheless.

“At this point, a lot of guys have to take a hard look in the mirror and decide why they’re playing basketball, why they love the game, and what it is about it that’s made them put in as much time and effort that they have up to this point,” Hejl said after his team’s 72-44 loss to Centaurus on Jan. 18. “For the seniors, it’s their last hurrah, and it hasn’t gone the way they’ve anticipated, so we’re just trying to keep them focused on finishing the right way and handling adversity and being mentally tough through the ups and downs.”

Hejl admitted that there have been more downs than ups for his team, especially as of late. In last Thursday’s game, Niwot fell behind early and never mounted a serious challenge to the Warriors. They were without leading-scorer Thomas Bounds, who had a season-high 19 points on Jan. 12 in the Cougar’s 73-50 loss to Mountain View. Bounds suffered a concussion off the court the prior weekend, and had to sit against Thompson Valley and Centaurus.

Without their top perimeter shooter, the Cougars had to try their luck under the basket, which proved a challenge at times this season. Up by 20 at the half, Centaurus briefly extended their lead to 30 late in the fourth, as Niwot’s defensive effort fell flat against Centaurus juniors Nick Vaver and Nate Totel, who went 9-for-12 from two-point range, and ended with 20 points.

“That changes us a little but,” Hejl said of Bounds’ absence. “It makes us even more inside-oriented than usual, and we just weren’t able to attack the inside like we wanted to tonight.”

Junior forward Dom Luthens went 7-for-7 from the free throw line, ending with 19 points on the night, but fouled out in the game’s closing minutes. He was also the Cougars’ top rebounder, with seven. Seniors Cam Carlson (8) and Tyler Crall (5) combined for 13 points, and Sai Aryan Nagula had four.

It’s not easy to find a silver lining amid a 13-game losing streak, but Hejl has been heartened by the play of his underclassmen during this stretch, including sophomores Milo Ostwald and Cooper Sheldon. Sheldon had eight points and three assists in two games last week, while Ostwald had four assists and four rebounds.

“The younger guys are still showing up and trying to light that spark that we so obviously need right now,” he said. “They know that’s what their role is, and they’re doing everything they possibly can. They’re hard workers and they love the game.”

Niwot hosts Northridge on Jan. 23, and heads back out on the road for a rematch against Greeley Central on Jan. 26, and then onto Silver Creek on Jan. 30. 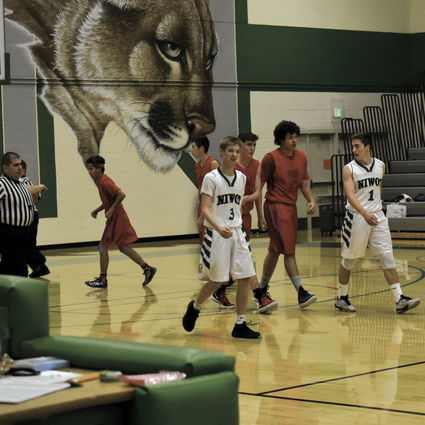 Junior Alex Erikson (3) and senior Tyler Crall (1) head back up court after a foul call.