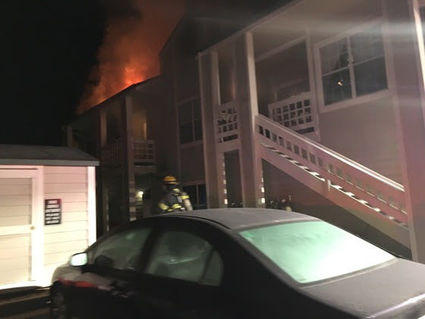 The Boulder Rural Fire Protection District -- with the assistance of the Boulder County Multi-Agency Fire Investigation Team (MAFIT), which includes sheriff's investigators -- has completed its on-scene investigation into the cause and origin of the overnight structure fire that claimed the life of a 57-year-old Gunbarrel woman. The scene investigation determined that the fire originated within the deceased woman's condominium; however, at this time, the cause of the fire could not be found.

Through their investigation, the MAFIT team concluded that the sliding glass patio door to the woman's condominium was open, at least partially, during the course of the fire. When the woman and her daughter were evacuated by neighbors out the front door of their condo, the fire flashed over as a result of the sudden increase in oxygen to the environment when the door was opened. The resulting ventilation-driven patterns from the flashover scoured all the initial fire patterns off the interior of the condo, rendering it impossible to definitively conclude where in the condo the fire started, and thus how it may have ignited.

The fire ultimately spread to the condo unit immediately above the originating condo, and both units are considered a total loss and are uninhabitable. The adjoining condominiums sustained varying degrees of smoke and water damage, some more heavily than others. The fire scene was released back to the property management company and their insurance company earlier today.

Sheriff's investigators are continuing to work in conjunction with both fire investigators and medical investigators from the Boulder County Coroner's Office to try and reconstruct what may have occurred based upon available evidence and witness interviews. At this point in the investigation there have been no indications of foul play or that the fire was criminal in nature.

The Boulder County Coroner's Office is responsible to publically identify the woman who died in the fire, as well as to determine the cause and manner of her death.

Additional information will be released as it becomes available through the on-going investigation.

The sheriff's case number associated with this investigation is 18-227.