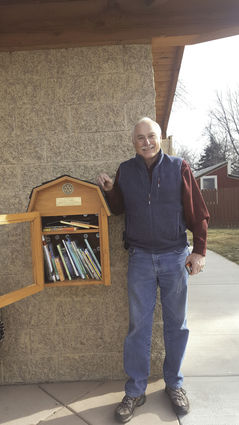 Kirk Stewart next to the Little Free Library installed on Jan. 6. at the Niwot Children’s Park.

Kirk Stewart wears many hats and, a kilt now and then too. A longtime resident of the Niwot area, Stewart steps up in many capacities for the community. Stewart’s professional life was as an aerospace engineer and a civil engineer. He has worked for governmental agencies and aerospace firms.

For the past nine years, after leaving working life behind, he amped up his community service activities. Stewart is a very energetic member of the Rotary Club of Niwot.

Through the organization he’s become the webmaster for the many websites the Rotary Club sponsors. He has made two Little Free Libraries for Niwot, and helped with numerous community events and service projects the Rotarians initiate and support, including Oktoberfest, Wine, Cheese & Chocolate Tasting (to be held this year on May 4), and painting the caboose at Whistle Stop Park.

The websites and pages Stewart administrates include the Left Hand Valley Grange, the Niwot Cultural Arts Association, the Niwot Historical Society, the Interact Club of Niwot High (a high school version of the Rotary Club), and the Niwot Community Semi-Marching Free Grange Band. Communicating with each group and maintaining their sites is an ongoing process that Stewart donates his time to at least half a day per week.

Building two little free libraries has been his labor of love for the community. Little Free Library is an organization that charters and maps the location of free exchange book structures dotted across the country. Stumbling on a library or being exposed to one as part of everyday life inspires the love of reading.

The first little free library Stewart made was unveiled at the Niwot Children’s Park this past Saturday. Working with Jim Fletemeyer, the landscape architect for the children’s park, they agreed on revamping a kit purchased from the national Little Free Library organization. It took Stewart two months to complete, and the end result is a book box that, with a modification to the kit’s roof line, is a nod to Niwot’s agricultural heritage.

The second library Stewart hand-made will be installed outside the Niwot Historical Society after the patio remodeling is complete.

Stewart is also a baritone player for the Niwot Community Semi-Marching Free Grange Band. When it comes to his baritone expertise, he considers himself “the least accomplished player” in the Niwot Community Band. He smiled when he said he doesn’t always play well, but elbow nudges and advice from fellow musicians help him improve.

His musician-ship began at age 40 when he decided that love of his Scottish heritage meant he was destined to play the bagpipes. Primarily it served as a way to escape from his work life for a bit and he became a fine enough player to perform with groups at festivals and weddings.

Stewart’s penchant for learning more about his genealogy led him to be the proud owner of seven kilts and to become Colorado’s State Commissioner of Clan Stewart, a heritage and education non-profit group.

His first move to Colorado was from California in 1965 when he attended the U.S. Air Force Academy in Colorado Springs. He left the state after graduation but returned for a job in 1977 and has been a resident of Niwot ever since. Stewart and his wife, Mary, have been married for 45 years.

Another hat he wears is as the “head yard flunky” for the couple’s 1.3 acre lot west of the Diagonal. The 2013 flood wiped out their yard and damaged the house to the point that they had to move out for five weeks while it underwent restoration.

Mary is a passionate gardener and Kirk was highly involved every step of the way to clean up and restore the devastated yard. Listening to Stewart describe what elements were incorporated in this three-year project, including berms, bountiful perennials, a small raised vegetable garden, and the selection of Buffalo Grass over other options, it’s clear how mindfully the Stewarts have restored their yard to a new state of beauty and functionality.

But no grass will grow under Stewart’s feet at this rate.

To find out more about the Rotary Club of Niwot, go to: http://www.niwotrotary.org