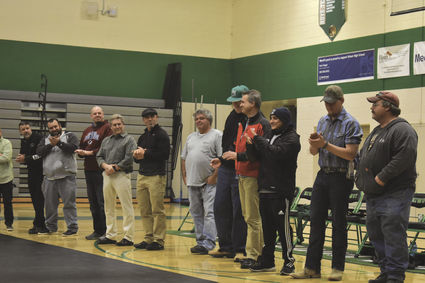 Representatives from five decades of Niwot wrestling were on hand for the second-annual Niwot Wrestling Alumni Night, held Jan. 5 during the Cougars’ dual against Elizabeth. From Brett Rugger (class of 1977) to Brandon Slepicka (2014), more than a dozen former Cougar grapplers came out for the event, which was organized by Niwot head wrestling coach Bobby Matthews in an effort to strengthen ties between his team and the community.

“Thank you guys for coming out here and trying to help us build the program back to where it’s been,” he said in a short ceremony following the match. “It’s important to stay in contact with our alumni and hopefully create an even bigger group every year.”

Unfortunately, the former wrestlers didn’t get to see a rousing Cougar victory. Short-handed due to the absence of Jose and Jovani Lopez, who had a family obligation, Niwot dropped nine of the 11 competitive matches, falling 53-18 to the Cardinals.

“We’re wrestling teams with a lot more experience than we have, and it shows at times,” Matthews said after his team’s third Northern League loss of the season. “Basically what they’re doing right now, for lack of a better term, is drinking out of a fire hose.”

Among the alumni was Garin Daum, ’93, son of legendary Niwot wrestling coach Gary Daum and Niwot’s last state wrestling champ until Tommy Stager won the a title last year. Daum was also on hand the following day for the sixth annual Gary Daum Memorial Invitational, which was rechristened from the Boulder Valley Invite in 2013 after the death of Coach Daum, who helmed the Niwot wrestling program from 1977 to 2005.

Being in their home gym was no advantage for the Cougars, who scored 42.5 points on their way to a 15th place finish out of 18 teams. Barton improved to 14-7 on the season, and picked up 17 team points when he took third overall at 138 pounds, as did Daniel Torres at 195. Elsewhere, senior Nathan Hemenway (170 pounds) posted wins in two consolation matches before being pinned by Cade Burton in the semifinal.

The Invite capped off a busy week for the Cougars, who opened the weekend with a 42-42 tie against Northridge on Jan. 4. Hemenway and Matt Bitterman picked up wins for Niwot, while another five wrestlers benefited from forfeits.

The Cougars will be back on the mat for a dual against Centaurus on Jan. 11, then will join more than 30 other teams for the Frederick Warrior Invite on Jan. 13 at Frederick High School. 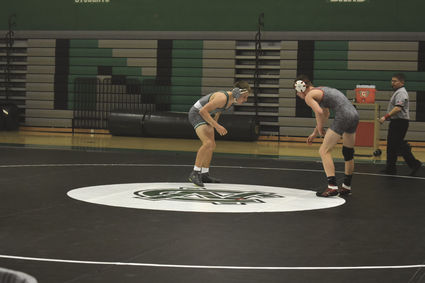