Student-Athlete of the Week: Kendra Perez 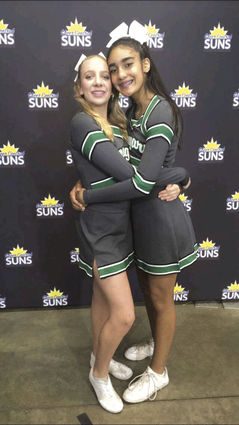 It’s not typical for a freshman to emerge as a team leader, but, then again, it hasn’t been a typical year for the Niwot cheer team. Following a last-minute coaching change and the departure of more than half of the cheerleaders, the team nearly disbanded in the early weeks of the 2017-18 school year. As the fall sports season loomed, just a handful of cheerleaders remained. Fortunately for new first-year coaches Alexis Bellinger and Catherine Linhardt, ninth-grader Kendra Perez was one of them.

“She always has a positive attitude and encourages her team to work hard,” said Bellinger. “She’s an incredible asset to our team.”

Perez’s childhood cheerleading dreams gave way to other athletic pursuits in middle school, so she didn’t have much experience when she finally decided to try out for the Niwot squad last spring. Nor did she expect it to be so rigorous.

“Cheerleading was actually so much more than I thought,” said Perez, who had successful stints on the Sunset Middle School track, volleyball and basketball teams before joining Niwot cheer. “I thought it was just girls being at a game and cheering, but it extended into having girls in stunts, having girls up in the air, and having jumps. It’s way, way better than I thought.”

As one of a just a handful of cheerleaders left after the squad nearly disbanded, Perez found herself thrust into a much more prominent role than she anticipated this season. Though the small team carried on as usual—performing at games, making locker signs, and marching in the Niwot 4th of July and Homecoming parades—learning new routines and preparing for State proved especially challenging in light of all the turnover, according to Perez.

“We had so many routine changes, it was tough. We had to work our hardest to make sure everything fit in time for State,” she said. “But once it came down to the final people we knew were going to participate, we worked so hard and in the end it obviously paid off.”

The nine-member Niwot squad finished 13th out of 31 at the State competition, five places higher than their 18th place finish in 2016. Like her coaches, Perez believes the team’s positive experience at State laid a foundation for a stronger team going forward.

“Most of us are planning to return next year, and we’re getting hyped up to plan new things to get more people involved with us,” she said.

When she’s not with the cheer team, Perez is a top student in the labor-intensive pre-IB program at Niwot, and also volunteers at the Longmont Humane Society on Thursdays and Saturdays. Though balancing her school work and cheerleading practice proved daunting at times this season, especially in the run-up to State and finals, the freshman has learned to prioritize and tries to take advantage of free time during her classes. Though just a ninth-grader, Perez is already looking ahead to college, where she plans to pursue a degree in animal medicine, and hopes to study abroad.