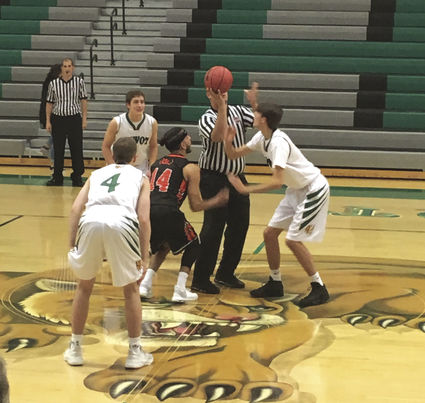 Seniors Cameron Carlson and Tyler Crall get ready for tip-off against Greeley Central in Niwot’s home opener on Dec. 8.

“The urgency’s just not there,” said a clearly frustrated head coach Eric Hejl after his team’s third straight loss. Since the team’s 60-55 season-opening win over Frederick, the Cougars have averaged just 35 points per game. “We just got out-hustled.”

Early on, it did seem as if Niwot had recaptured a little of their opening-night adrenaline. The Cougar offense got a spark from junior Dominick Luthens, who made his first appearance of the season after missing the first three games due to injury. With a combined nine points from junior Tommy Bounds and senior Cam Carlson, the Cougars were down by just two after the first quarter.

After that, Greeley Central put on a full-court press, effectively blunting Niwot’s offensive momentum. The Wildcats’ quick-handed guards forced a near constant stream of turnovers, and the Cougars surrendered several easy buckets. Greeley Central went on to outscore the Cougars 12-4 in the second quarter, and took a 25-15 lead into the break.

Niwot finally got some momentum on offense as the third quarter ticked into the fourth, paced by senior forward Sai Aryan Nagula who had three three-pointers in three minutes. He was helped out by Luthens and junior Alex Erickson, as Niwot scored a quick 11 points to open the last quarter.

“He’s certainly capable of playing that way all the time,” Hejl said of Nagula, who ended the night with a season-high nine points, “We just have to make sure we’re getting him the ball when he’s hot like that.”

Unfortunately, Niwot’s shooting cooled late in the fourth, as Greeley Central kept up the pressure on defense. A pair of technical fouls on the Cougars in the final minutes put the game out of reach for good, and Greeley Central went on to win 62-43.

“We had a hard time penetrating the top line of their defense,” Hejl said, and added that the Cougars’ poor passing and missed scoring opportunities were also culprits in the loss. “We didn’t take care of the ball.”

Nagula was the Cougars’ leading scorer, followed by Bounds and Erikson with eight apiece. Luthens and Carlson both had six.