71st Street improvements on tap for 2019 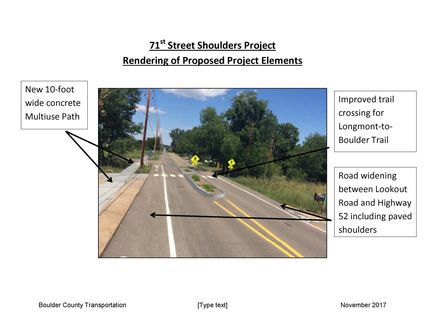 Gunbarrel residents were able to get a first look and make comments about preliminary plans for changes to 71st Street at an open house, held at Emerson-Micro Motions in Gunbarrel on Dec. 4.

Many in attendance felt that the changes were necessary. Lindsey Killion who lives in The Lookout said, “I think it’s a good idea that the county try something here because there are a lot of people who use this stretch, whether biking or walking. It’s kind of a dangerous scenario at this point.”

Theodore Master said that the changes were overdue.

As indicated on the county’s website, the project includes:

· Full reconstruction of 71st Street from Lookout Road to Highway 52

· Widening the road to include paved shoulders

According to Tim Swope, the capital program coordinator for the Boulder County Transportation Department, the 71st Street shoulders project was part of a countywide ballot initiative in 2007. A list of forty-three road projects have been paid for by a one-tenth of one percent countywide transportation sales tax approved by voters.

Swope said the project involves working with the City of Boulder, which owns the northern portion of 71st Street, and the Colorado Department of Transportation which owns Highway 52. CDOT is funding a portion of the project that includes building the concrete multi-use path from the Gunbarrel Business Park south to Lookout Road and widening the sidewalk on Lookout Road down to Idylwild Trail.

The approximately three-million dollar project is mostly funded by Boulder County Transportation. CDOT, through a federal grant, is contributing $860,000 or about 30 percent of the total cost, and the City of Boulder is funding the asphalt overlay of the city’s portion of the road.

“This is a large project,” Swope said. “It will probably take most of the summer and into the fall [of 2019]. I’d say four to six months.”

In addition to the work listed on the website, Swope said, “We are extending one concrete box culvert for the Boulder and White Rock Ditch and we will be replacing the City of Boulder culvert over Dry Creek #2. …Replacing those culverts will result in a short-term closure of the road, but the road will remain open through the rest of construction.”

The current design calls for moving the intersection of 71st Street and Highway 52 about 200 feet to the east to improve vehicle sight distance and turning radius. The move would allow 71st Street to come at a right angle to Highway 52. The land to accommodate this change was purchased from City of Boulder Open Space and Mountain Parks.

“CDOT has a long-term plan to signalize that intersection, but there are no plans at this time,” Swope said.

Andrew Barth of Boulder County Transportation estimated that approximately 35 people attended the open house. Katherine Wolniewicz summed it up nicely when she said, “I think it’s all great. It’s wonderful to see improvements, especially for bikes and pedestrians.”