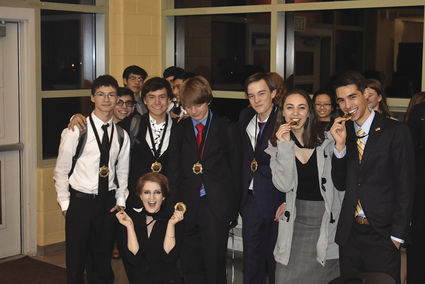 Led by co-captains Aileen Ma and Stephanie Reitzig, the team is off to a blistering start this year, with medal-winning performances from both their seasoned veterans as well as some high-spirited newcomers.

Such was the case last Saturday at the annual Fire on the Ridge Forensics tournament at Northridge High School in Greeley. A medium-sized tournament, as these things go, this year’s Fire on the Ridge attracted a dozen or so schools, mostly from Northern Colorado, though a team from Mullen showed up to represent south Denver.

“The NCAA topic is pretty fun,” said Goff, who, with partner Wade, argued alternately for and against the resolution NCAA student athletes ought to be recognized as employees under the Fair Labor Standards Act. “It kinda can go either way. Last month’s topic [universal background checks] was pretty skewed, but this one is a little bit more either way.”

“I was totally expecting it to be horrible,” Wade said, who added that their argument against the resolution was the stronger of the two.

Metlay had the breakout performance of the day, with two finalist medals, including one for her first-ever appearance in DX. In each DX round, competitors have 30 minutes to prepare and memorize a five-to-seven minute speech on a question related to current events in the U.S. In Metlay’s finals round, she opined for five-minutes and 45 seconds on “identity politics” and its negative impact on domestic relations, earning a third-place medal for her efforts.

“My goal for the first semester was to try every event that I haven’t tried yet,” said the third-year forensics student, who specialized mostly in interpretive events in her first two years with the team.. “I’m really glad I did, because now I know that domestic extemp is really fun and I can do really well in it.”

The junior also received a fifth-place medal in POE for her oral interpretation of a four-poem collection centered on the theme “Yearning.” She has also tried Lincoln-Douglas debate this year.

Clark and Schrock were all smiles after their third-place finish in the meet’s “experimental” event, team extemporaneous commentary. With a focus on cultural rather than political or philosophical topics, the team extemp consists of four rounds where one team member answers a timely question on a topic in one of four categories. After the competitor chooses a prompt, he or she has five minutes to prepare a five-minute response.

Clark answered the first-round question about Hollywood, concerning whether Marvel should market a female superhero and the third-round Sports round question about the whether the US women’s soccer team is prepared for the World Cup. She was a firm yes to both, even though sports isn’t exactly her area of expertise. Luckily, she heard a brief snippet about the World Cup on a recent NPR segment, so she had some scant knowledge to fall back on, as well as a couple of tricks up her sleeve.

“One of the best ways to handle answering a question you know nothing about is to attack the question,” the senior said following the final round. “You can make a pretty decent speech and really display your personal knowledge of what’s going on in the world but through a different route, and you’re still connecting to the question.”

Schrock answered the questions in the Music round (Is Kanye West really a musical genius?) and the Potpourri round (Should there be mistletoe hanging at the White House this Christmas?), issuing hard passes on both, especially the latter, mostly due to the non-consensual aspect of the custom.

“Mistletoe is a tradition deeply-rooted in many cultures, but in the end, what is more important, an outdated tradition, or the value of a human person?” Schrock said. “I came to the conclusion that it’s a pretty obvious answer.”

Meanwhile, seniors and four-year teammates Reitzig and Ma threw their hat into the PF ring at Fire on the Ridge, after top finishes in speech events earlier this season. In the fourth and final round of the day, the pair argued against the NCAA resolution, citing, among other things, expensive benefits already provided to student-athletes (scholarships, medical care, free meals, etc.) In earlier rounds, they argued the opposite, citing mainly economic harms under the “status quo,” including exploitation, but also moral harms such as racism.

Ma admitted to having strong personal opinions about the question at hand, but said that working to overcome her biases actually makes her opposing argument stronger. 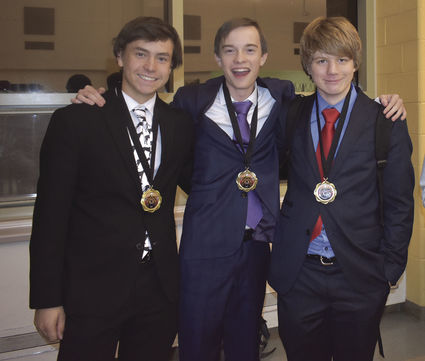 “In the NCAA student-athlete thing, I felt kind of strongly against pro, but that’s the one we argued most today, so you wrap your opinion around it.”

Reitzig agreed, “When you’re arguing against your personal opinion, you’re likely to do more research and, as a result, you’re more likely to form a case based on solid logic as opposed to pure emotion.”

Unfortunately, the captains did not finish among the top-six PF teams on the day.

Next up for the Niwot forensics team is the Collins Clash at Fort Collins H.S. on Dec. 9 On Jan. 13, Niwot hosts the annual Niwot Invitational Tournament. Judges and other volunteers are needed. Please contact Mr. Pankonin at Pankonin_William@svvsd.org or 708-921-7891 to add your name to the list.