Student-Athlete of the Week: Manuel Tapia 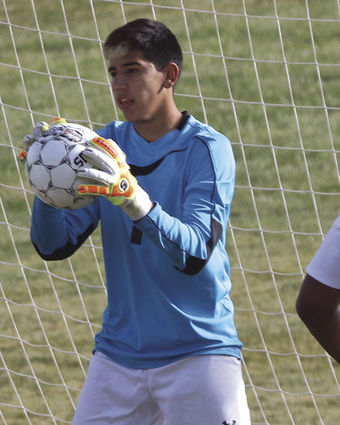 Manny Tapia in goal against Battle Mountain in Round 2 of the Class 4A playoffs.

It’s hard to characterize 2017 as anything but a breakout season for Niwot forward Manual Tapia. After just two varsity appearances in 2016, the junior seemingly came out of nowhere to score a team-high 41 points and lead the Cougars to the Class 4A state semifinals for the first time since 2011. Of his 16 goals on the year, five were game winners, including the golden goals in Niwot’s Oct. 10 win over Silver Creek and in the quarterfinal match against Denver North in the final seconds of double-overtime back on Nov. 4. If that wasn’t enough, the multidimensional Tapia also served as substitute keeper in Niwot’s playoff games against Erie and Battle Mountain after Mario Munoz was sidelined with a concussion.

“He was the state’s best kept secret,” Niwot head coach Steve Dimit said of the speedy striker, who was beset by injuries in his sophomore season. “He’s a lot bigger than he was last year. I fully expected he would turn into a star for us.”

Tapia was a key component of Niwot’s offensive resurgence in 2017. In 18 games, he and fellow forwards Jason Rodriguez and Jonathan Jimenez-Flores scored a combined 36 goals and 99 team points, more than the entire 2016 Niwot offense (31 and 89). In total, the Cougars scored 64 goals and 186 team points in 2017, the highest in the Northern League by a substantial margin. Paired with a defense that allowed just 19 goals all season, Tapia and the Cougars proved almost unbeatable in 2017.

Tapia credits his team’s close bond for what he termed “an exceptional season.”

“I know no one was expecting what we were going to do, but we stuck together like a family and made it pretty far.” Continuing, he added that his fellow players’ faith in his abilities, especially during his short stint as keeper, was also a key driver of his success this season. “I knew all of my teammates believed in me.”

Tapia also shared credit for his success with members of his soccer-crazy family, especially his mom, who is in the military and currently deployed overseas. A soccer standout at Skyline back in the day, Tapia’s mom got him started playing the sport at age four and continues to serve as his main inspiration today.

Tapia also has a coterie of soccer-playing cousins, including Nazary Ramirez-Tapia, a standout defender on Niwot’s girls soccer team, and Mark Ramirez-Tapia, who played forward for the Niwot boys team in 2014 and 2015. In his senior season, Ramirez-Tapia amassed 70 total points, with 27 goals and 16 assists, and helped lead Niwot to a quarterfinal appearance in the state tournament. He is currently a sophomore playing at Johnson & Wales University in Denver, but makes time to come back to Niwot to see his younger cousin play.

When he’s not playing soccer for the Cougars, Tapia is probably playing soccer for club team, or watching soccer either on TV or in person. Off the pitch, Tapia enjoys his business and marketing classes at Niwot, and is especially close to teacher Scott Robles. After high school, Tapia has his sights set on a collegiate soccer career like his cousin, and hopes to earn a business degree.