Local Athletes to Compete in College 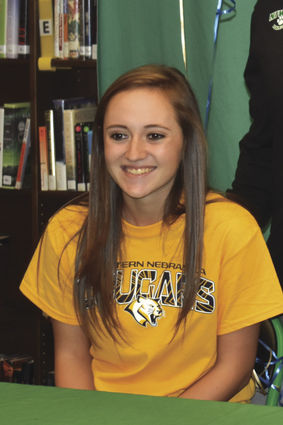 Niwot senior Jaila Johnson will play softball for the University of Western Nebraska next year.

For as long as she can remember, Niwot volleyball standout Mackenzie Fidelak has had Stanford University at the top of her college wish list, but not necessarily for obvious reasons.

To be sure, Stanford is home to one of the most successful collegiate volleyball programs in the country. Winners of seven NCAA national championship matches —and runners-up in another eight—the Cardinal are a perennial top-ten team that has never finished a season with a losing record. Boasting alumni such as Olympians Kerri Walsh Jennings and Logan Tom (the youngest volleyball player in US Olympic history), Stanford has long been the first choice for the nation’s top high-school recruits.

Ultimately, though, Niwot’s powerful right side hitter was drawn to Stanford not for its athletics but because of its stellar academic reputation. As one of the most selective universities in the U.S., Stanford has also long been a top choice among the country’s best students, and so a perfect fit for Fidelak.

“As I was going through my recruiting process, there was a big emphasis on looking for a school that had good academics and athletics, and Stanford was the solution,” she said after signing an early letter of intent to play for the Cardinal. “Having seen them play and just knowing what kind of school it is, this just felt right.”

Of course, one does not simply get into Stanford. Fidelak earned her spot in the 2018 recruiting class with four years of standout play on Niwot’s varsity squad, as well as hours of hard work and grueling travel for the NorCo volleyball club. In 339 sets as a Cougar, the 6’+ Fidelak amassed a total of 1,019 kills (3.0 kills/set) and hit well over 33%. As a senior and captain this year, Fidelak led Niwot to its first semifinal appearance in the Class 4A state tournament since 1997. Next year, Fidelak will have to compete for a spot at right side hitter on the varsity roster.

“It’s very competitive,” she said. “I’ve talked to my coach about it, and it’s just about who works hard. Nothing’s guaranteed. But when I get there, if I work hard and get better, I’ll be fine.”

Fidelak plans to study psychology and marketing at Stanford, and looks forward to enjoying the California lifestyle before the responsibilities of adulthood set in. At the same time, she is definitely not looking forward to leaving her friends and family in Niwot.

“The staff here is really supportive,” the senior said. “I’m super close with a bunch of teachers here, and it’ll be sad to say goodbye to everyone, especially my friends, who are looking at colleges on the east coast. That’s going to be really sad.”

Last spring, Niwot sprinter Mary Gillett burst onto the Colorado track and field scene with blazing times in the 200m and 400m dashes and, seemingly out of nowhere, established herself as one of the fastest girls in Colorado. After winning two individual state track titles as a junior, the breakout star started attracting attention from the top track programs in the country.

Like Fidelak, Gillett brings both athletic prowess and academic talent to the table. As a top student in Niwot’s demanding IB program as well as a multisport athlete, she was hoping to find a school to nurture both. After fielding offers from Harvard, Princeton and the University of Pennsylvania, the in-demand senior realized that only Stanford could offer the best of both worlds.

“Some of the schools I was looking at were really good academic schools, but didn’t have as rigorous an athletic program,” she said after signing her early letter of intent. “So Stanford was the perfect combination, and when I went to visit, I just loved the coaches that I met and I loved the people and the location, and that just sealed the deal.”

Gillett is slated to compete in the 200m and 400m events for the Cardinal, and will see some familiar faces among her new teammates. Middle distance runner Elise Cranny, who led the Niwot girls track team to three straight state titles in 2013 and 2014, will be entering her fifth year of college and fourth year of eligibility at Stanford, as will Valarie Allman, who won state titles throwing discus for Silver Creek before graduating in 2014.

Gillett is planning to study human biology while at Stanford and hopes to become either an athletic trainer or a nutritionist after earning her degree. She, too, is looking forward to spending time in the Golden State, and can’t wait to head out to the beach. Though excited about the future, she is also clear about the realities of Division I college athletics.

“In high school athletics, it’s just a family, just trying to do their best and have fun,” she said. “In college, they want to win and it’s more of a business. I’m definitely going to miss just being able to run for fun and the love of it.”

Kelsey Webster of Gunbarrel, a senior at Fairview High School, signed a National Letter of Intent to play golf at the University of Colorado.

Webster, who also lettered in basketball at FHS, was the Frontage League champion her junior year with the lowest average score in the league of 73.1. Her average is also the lowest stroke average in Fairview women's golf history under head coach John Zerwin.

Her lowest round came at the Chilly Chili Invite last spring, where she shot a 3-under 69, tying a tournament record. Webster was a first-team All-State and Front Range League recipient.

"We are thrilled to add a hometown golfer to the CU women's golf program," CU Coach Anne Kelly said. "Kelsey is a fairly young golfer, but works extremely hard on her game and has shown some good results over the last few years. With a little more refining of her short game skills and some college level experience, we see her being a very strong player for the CU women's golf program."

Webster, who enjoys music, Young Life, and coaching YMCA basketball, is the daughter of Bob Webster and Katherine Ann Cantrell. Bob Webster was an Evans Scholar at CU, and has been very active in the Boulder Country Club for many years.

Jaila Johnson, who played virtually every position on the field during her four-year softball career at Niwot High School, signed to play softball next year at Western Nebraska Junior College in Scottsbluff, NE..

Johnson was characterized by NHS Athletic Director Chase McBride as the ultimate team player for Cougar softball, playing all nine positions on the field at various times.. She also happened to be the first athlete McBride met when he became the NHS Athletic Director four years ago, and she made quite an impression. “You are the epitome of what student-athletes are,” McBride said.

Although she went behind the plate when needed, and also played the infield, Johnson prefers to play leftfield, where she started for Niwot as a freshman, and where she spends most of her playing time during the summer on her club team, American Freedom. But last fall, Cougar head coach Bobby Matthews asked Johnson to pitch, something she had not done since her early days playing softball. 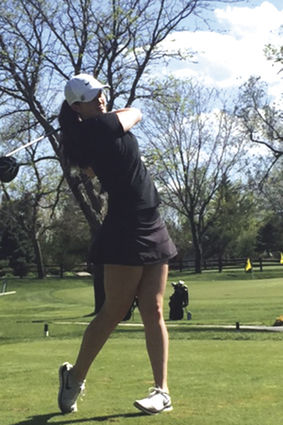 Kelsey Webster hits a drive at the Boulder Country Club.Local Athletes to Compete in College

It wasn’t her favorite position, but she pitched most of the innings for the Cougars, who finished 6-13 on the year, while hitting .585 and earning Northern Conference honorable mention.

Black Hills State and North Platte Community College were other schools Johnson considered, but after a visit to Scottsbluff, she knew where she wanted to go. “I like the small town,” Johnson said. She lives in Firestone, but open-enrolled at Niwot. “I was the only freshman on varsity, and the older girls, Brooklyn Delozier, Meghan Waidler and Bailey Kleespies, really took me under their wing and made me feel welcome,” Johnson said.

Her future plans are to become a radiologic technician, with a focus on mammography and ultrasound.