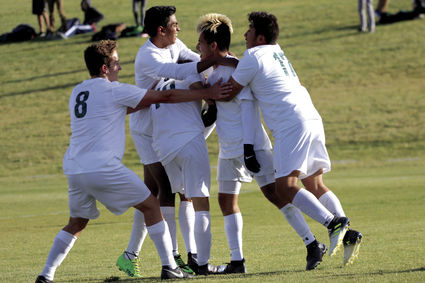 If Niwot’s 7-0 win in Round 1 of the Class 4A state tournament put any lingering doubts about the offense to rest, then the two matches since have done the same for the defense. Thanks to their nearly impenetrable back line, the Cougars claimed narrow victories over Battle Mountain and Denver North to advance to the State semifinals for the first time since 2011.

Niwot clinched its semifinal berth on Saturday with a 1-0 win over the No. 6 seed North Vikings in double-overtime. For 109 minutes, neither team mustered a clear advantage on the attack, though Niwot had good opportunities in the 65th minute from senior Davin Bala and junior Manny Tapia, and again in the first overtime from Dylan Campbell, but none could get a finishing touch past North keeper Bryan Torres.

Meanwhile, Crall, Grant, Lee and Marrufo deftly fought off North’s crafty forwards, who managed 12 shots on junior Mario Muñoz, but didn’t really come close to scoring. North’s best chances came midway through the second half, before the Niwot defense got its second wind.

“It was really important for us to be a cohesive unit and communicate,” said senior Lee after the shutout. “We all came together, we had each other’s back. It was the best defensive performance we’ve had.”

Tapia finally ended the stalemate in the 110th minute when a free kick by Jonathan Jimenez-Flores rebounded off a Vikings defender and headed Tapia’s way. The junior striker redirected it with his head, sending it just past the outstretched hand of Torres into the back of the net for the sudden-death victory. Ecstatic teammates and fans flooded the field to celebrate the dramatic quarterfinal win.

“Our defense was really stout today,” Dimit said following the game. “Abe had a great game today. Tyler Crall had a great game. Nicholas, Cam, Alex (Torcello), everybody we asked to stepped up back there.”

Both Dimit and Lee called the win a “total team effort,” with standout performances up and down the roster.

“To have two guys like JJF (Jonathan Jimenez-Flores) and Manny who just have that will to win, it’s super exciting,” said the coach. “Jared Osteen, his last shift out there was incredible. And we ran poor Chuy (Jesus Gonzales) into the ground…He’s just a rock for this team.”

The Cougars also welcomed back Muñoz, who was sidelined for the first two playoff matches with a concussion. In 15 games this season, the third-year varsity goalie allowed just 15 goals and had five shutouts.

“It’s good to have Mario back there taking care of the slop, too,” said Dimit, adding that another benefit of his return was having substitute goalie Tapia back up top. “If Manny’s not up there, we don’t score.”

On the other hand, it’s possible that Niwot would have found a way even without Tapia. Earlier in the week, Niwot forward Jason Rodriguez struck twice in six minutes in the Cougars’ heated 3-2 win over Battle Mountain in Round 2 of the State tournament, proving they have the depth to withstand the loss of both their top keeper and their top scorer, even against one of Class 4A’s top offenses.

“I thought our will to win was really good,” Dimit said following the Cougars’ first Round of 16 win since 2013. “Particularly after they tied it up, we just kept hammering away.”

Tied 0-0 at the half, Rodriguez finally broke the ice in the 58th minute with a shot past Huskies keeper Alan Villegas after a perfect centering cross from Andres Montealegre. Battle Mountain evened it just minutes later, but Rodriguez answered right back, taking advantage of an under-guarded goal after a free kick by Grant, who was credited with the assist. Junior Magnus Hansen belted home a cross from Montealegre in the 73rd minute for what would turn out to be the game winner.

“It was a good team effort today,” Grant said after the hard-fought match against last year’s state runner-up. “We had a few individual standouts, like Jason, but the entire team was just really solid.”

Niwot faces against Northern League foe Centaurus in the semifinal round on Nov. 8. On Oct. 10, the Warriors handed Niwot their first and only loss of the season, and Dimit is eager for the rematch.

“I am absolutely looking forward to that,” he said. “They’re a fun team to play against. Our last one was a barnburner. I can’t wait.” 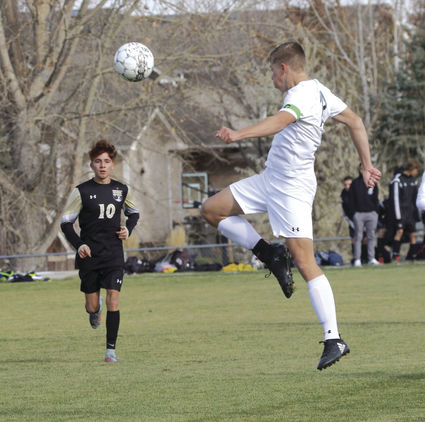 Defenseman Cam Lee rebounds the ball with his knee against Battle Mountain.