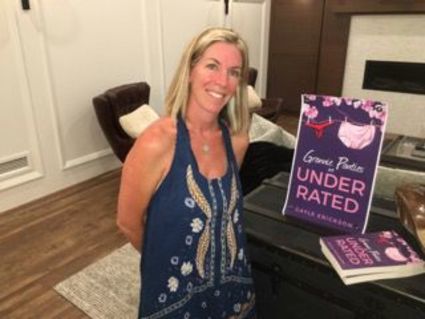 Before book reviewers declared Grannie Pants are UnderRated as “engaging,” “entertaining and suspenseful” and being full of “raw honesty,” Gayle Erickson’s best-received written works were her highly anticipated, hysterical annual Christmas letters to friends and family.

The story of the book’s heroine, Elle, percolated in Gayle Erickson for three years and is now a published debut novel. “It’s a story about redemption and facing the truths of the past,” Erickson said. A 1987 Niwot High School graduate, Erickson said the book is definitely not an autobiography, but it does draw on her familiarity with Japanese culture and her life as a housewife.

This past summer Erickson (who now lives in Lone Tree, CO) attended the 30th reunion of NHS high grads, and celebrated the birth of her book as well. Published in June, it has since been making the rounds of book clubs. The book appeals to women in particular as it explores a time when younger Elle was open to adventure and self-indulgence, and participated in dark, secret situations. Contrasting that decadent time in her life with her middle-aged self, now settled in a traditional wife and mother role, Elle is reintroduced to her past and forced to examine how to proceed with her present life.

Erickson, like her character Elle, moved to Japan after graduating from college. She is quick to say that her experience of setting out for Tokyo with only $300, no place to live, and no job was simply the result of having no idea what else to do. “I just got lucky,” she said when she explained that she made a life for herself there for three years, finding lifelong friends and teaching English.

A disciplined and self-described perfectionist, Erickson’s writing process means she works on the book for a specific amount of time each day. She said with a smile, “As a stay-at-home mom, there’s always something else I could be doing…house work, online shopping… but I made myself sit there and write.” Some days that resulted in one page and a lot of clock watching. Other times she was utterly lost in the process and the entire day passed quickly.

When Erickson set out to write the book, she said she had the beginning figured out and mostly had the end figured out, but the middle parts unfolded as she wrote, and some of what she wrote even surprised her.

To enhance the mood of the book, Erickson creatively interwove her favorite music from the ‘80s into her story by titling each chapter with a song from that era. Elle’s belief that music foretells clues to her life is a key element of the plot, and there’s a Spotify playlist of the songs mentioned.

The challenge of writing the book took a back seat though to learning how to market her creation. She decided to self-publish through her company, Mile High Publishing. She learned about book review companies, and how to bring her novel to their attention to get objective endorsements, as well as public exposure.

Erickson is honored that Kirkus Reviews (a company specializing in reviewing independently published books) chose her book to be one of their specially highlighted reviews. Another online book review company, Good Reads, described her novel as “a page-turner full of surprising twists.”

The book tackles the stages of our lives when things need to change and Erickson acknowledged that it takes courage and tenacity to reinvent ourselves. She explained, “As parents, we encourage our children to jump in and try new things. But as adults, we are afraid to put ourselves out there.”

And she’s not just describing what her heroine Elle grappled with in her life. Erickson is also recounting what she has so adeptly done by writing her debut novel and making sure it gets into the hands of readers.

Her world for the last 18 years has revolved primarily around her family, in particular her twin son and daughter. Their high school graduation next year brings a new chapter to Erickson’s own life. The thought of her house suddenly being empty has already driven her to think of adopting a puppy. But Erickson is a writer now and adding to her existing two-dog household is not the only place she’ll be putting her energy. A new book is already in the works. Titled “Double Fault,” Erickson said this book will be a great read to a wider audience and she is planning for the book to be ready for press next summer.

Daughter of beloved long time Niwot High School teacher, the late Ernie Reichert, Erickson gives a huge shout out to Niwot. With his passing from Alzheimer’s in August, her love for the Niwot community was reaffirmed by the warm outpouring of affection and admiration at his memorial service. Given his big personality and off-color sense of humor, Erickson feels he would be very happy and proud of her for writing Grannie Pants are UnderRated.

And the impetus for the titillating title? Erickson said, “Grannie panties serve as a metaphor for the main character’s life.” Thongs represent Elle’s early self and the question of whether wearing grannie panties in middle age means you’re totally giving up, or that donning comfy grannie panties is simply misunderstood, is an important notion of the book.

Erickson’s book, Grannie Pants are UnderRated, is available as a Kindle book or a paperback through Amazon. To learn more about the book and author go to: milehighpublishinghouse.com.