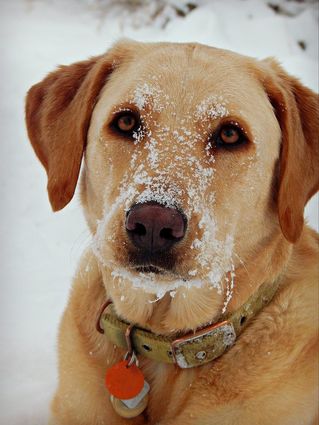 Seventeen-year-old Annie Wiorek recently received serious acknowledgement that she’s solidly on the path to her chosen career. Wiorek’s passion for taking photographs netted her two first-prize awards this year at the Boulder County Fair. She won first place in both the mammal and reptile categories, second place in the bird category, third place in the open category and an honorable mention in the people category.

Her favorite subjects for photos are animals and nature. Living on a farm, there are many settings and creatures to choose from. The Wiorek family lives just northwest of Niwot where they raise Red Angus cattle. Along with the livestock they raise for beef, they also have chickens, an indoor rabbit, a turtle, and three dogs, Greta, Lady, and Oliver. “The chickens are the most photogenic” Wiorek said. “They love the camera, and the cattle are adorable, like big teddy bears almost.”

She purposely heads out to seek interesting landscapes and animals to photograph. Her first-prize image in the reptile category was of a frog she simply happened on while in Minnesota. When she’s just out and about, Wiorek feels comfortable asking people if she can take their picture, and people have been very receptive. She enjoys working with black and white images and at the other end of the spectrum, bright, vivid colors capture her attention.

While Wiorek is an exceptional photographer, she has fought other battles in her young life. She was four years old and living in Asia, with her family, when she developed a bad cold that required medical attention. The doctors discovered a brain tumor during her appointment.

Within days, Wiorek and her mother, Josanne Wiorek, returned to the states so Annie could undergo medical treatment. After recovery from two surgeries to remove the tumor, they returned to China. A third surgery was needed when she was 11 years old which was done in the states as well.

Thankfully, Wiorek’s cancer scare has moved to the background of her life. She doesn’t recall much of the ordeal from when she was four, but with the last surgery she said, “I was just ready to be done with the drama of it all.”

The tumor Wiorek had was in the left side of her brain and, more as a result of the surgeries, the right side of her body suffered some long-term challenges. After the first operations, she needed to learn how to walk again and was trained to be right-handed versus her previous left-handed dominance.

Also, as a result of the surgeries, Wiorek has some learning difficulties, making school tough for her. Studying and taking tests became very stressful, and a couple of sensory issues remain - the inability to taste or feel on the right side of her tongue, loss of the ability to hear voices (although she can hear other sounds) and what she said is “impossibly loud” tinnitus in her right ear. The other challenges Wiorek deals with are especially hard when doing her work as a photographer – balancing takes more effort and her hands shake a bit.

The Wiorek family moved back to the US permanently from China and Annie was home-schooled here until three years ago. She is now a senior attending Crossroads School in Longmont. The mission of this alternative school is to support and mentor students with challenges. The school’s philosophy is to help students identify their individual needs and strengths, to allow them to work at their own pace to complete their high school studies, and to prepare them to contribute to the world.

Wiorek praises Crossroad’s Executive Director, Barb Bulthuis, for supporting her and finding people and ways for her to learn more about photography. Bulthuis has found just the right intern situations for Wiorek so she can continue to sharpen her abilities. Wiorek is also in awe of how her parents are there for her, and how they make it possible to pursue her love of art as a career.

She intends to continue her education by taking classes at Front Range Community College and then moving on to earning a four year degree in photography at a university.

Other creative pursuits Wiorek enjoys are writing (she’s written quite a few novels and short stories) and painting. She loves creating “really weird” abstract paintings and also uses photographs she’s taken as the basis for paintings. 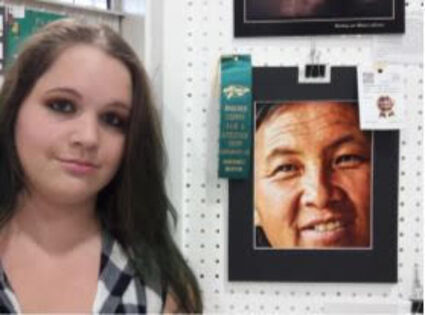 Wiorek stands next to one of her entries in the fair last summer. Her interest in photography and talent continues to be a big part of her life.

Wiorek has been honing her talents behind the lens of a camera for six years. Once a hobby for her, she has now reached a level of proficiency where she not only wins awards, but is also earning money with her skills.

A particularly poignant photographic experience Wiorek offers is to take pictures of pets toward the end of their lives. She has titled this part of her business “Last Memories.” She also offers photo sessions for high school seniors, wedding and other event photography, as well as family portraits. Her clients come to her via word of mouth, but she may begin to do more advertising.

Wiorek owns one well-loved camera, a Canon Coolpix L830. When asked why being a photographer resonates so deeply with her, Wiorek answered, “Photography is the ability to capture a thousand feelings in one picture.” Wiorek has a website with a gallery of her work – http://www.awiorek.wixsite.com/awphotos.