Student-Athlete of the Week: Riley Black 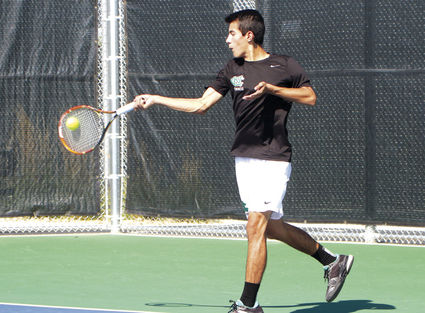 Before taking it up eight years ago, Niwot No. 2 singles player Riley Black had no interest in tennis.

“I actually didn’t want to play, but my mom made me try it,” the talented right-hander said, adding that his preferred sport at the time was baseball. “But I ended up liking it, and here we are.”

For Black, ‘here’ is on the on the eve of his third straight appearance in the Class 4A state tennis tournament. As a freshman in 2015, Black and partner Riley Mulshine lost in the quarterfinals of the No. 3 doubles bracket, but last year, he finished second overall in No. 3 singles, the best individual finish for a Niwot player in the state tournament since 2014.

This year, he punched his ticket to Pueblo with a second-place finish in the No. 2 singles bracket of the last week’s Class 4A Region 5 tournament. Though he lost a hard-fought championship match to Peak to Peak’s Teo Cariov, Black said the tough competition was good preparation for next week’s ultimate test.

“He’s a really good player, and that’s the best I’ve ever done against him,” he said following the 6-4, 7-5 loss to the top-ranked junior. “Knowing that coming into the match helped me a lot.”

Niwot head tennis coach Miikka Keronen agreed. Despite the loss, the coach said Black is ready to make another deep run in Pueblo.

“He played really well. He had match point in that second set,” he said. “I think that’s the closest he’s come to beating Teo, and I feel like that’s a really good indicator for next week’s state tournament.”

Black stays busy off the court for the Cougars as well. An excellent student, Black maintains a high GPA in a demanding course load that includes several AP classes, including favorites AP Government and AP Economics. Outside the classroom, Black participates in Model UN, National Honor Society, and Student Council. To stay on top of it all, Black said he’s learned to effectively budget his free time.

“It’s a lot to handle, and I’ve really had to work on my time management over the years,” he said. “It’s time management, and being able to focus, and staying away from distractions.”

At this point, the junior doesn’t have firm post-graduation plans, and isn’t sure whether he will pursue tennis collegiately or not. For now, he’s just looking forward to bonding with his team in Pueblo.

“I’ve always really liked the bus rides down to state,” he said. “It’s all your teammates and it’s just the anticipation of going to state and knowing that everyone’s gone so far.”