Boys Golf: Niwot competes at the Class 4A State Championships 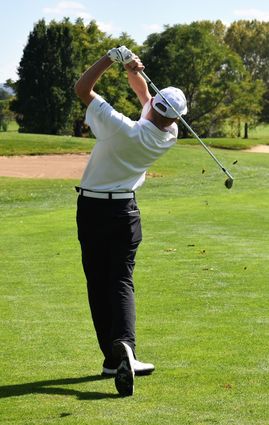 Jack Hoover tees off in Round 2 of the Class 4A State Championships at Raccoon Creek Golf Course on Oct. 3

Despite an unfortunate performance on the first day of the tournament, Niwot golfer Jack Hoover was sanguine during Round 2 of this year’s Class 4A State Golf Tournament at Raccoon Creek Golf Course in Littleton.

“Yesterday was a little rough,” he admitted after putting for par on the fourth hole on Tuesday. “Today, so far, I’m pretty good. Off the tee, I’ve hit pretty well. I’ve struggled on the greens today, but that’s golf.”

Hampered by unseasonably damp weather, the junior carded double-bogeys on his first two holes in Round 1 and never really recovered. He came in with a disappointing 89 (+17) on the day, tied for 56th place with his brother Sam Hoover and three other golfers.

“Overall, it was not the best day to play golf,” he continued. “But it was the same conditions for everyone, and we were able to get through it.”

The younger Hoover played closer to his average on Monday, but still not quite as well as he’d hoped. Like his brother, the sophomore hit a rough patch early and couldn’t catch up. He also echoed his brother’s pragmatic reaction to his first round challenges.

“I was not the best yesterday,” the sophomore said after tying his brother at +17 the day before. “But I’m hanging in there today.”

“I think the guys played in some tough conditions yesterday, and the course played a little harder,” Niwot head coach Ed Weaver said during the final round. “But they responded pretty well. Jack really kept his composure through the whole day.”

Both improved on Tuesday, though the elder Hoover’s putting woes continued. He consistently outdrove his partners and hit the greens in regulation, but routinely missed on short puts. He knocked four strokes off of his score from Monday, but ultimately finished well out of contention, in 44th place. Sam Hoover had a birdie on his ninth hole in Round 2, but a quadruple-bogey five holes later doomed him to a +16 on the day, and a 52nd-place finish in the tournament.

Though the tournament didn’t go quite as well as they’d hoped, both brothers said they enjoyed their time at Raccoon Creek. They also plan to be back out on the course getting ready for next year as soon as possible.

“It’s always fun to be here with all these guys and hang out and mess around,” Jack Hoover said. “It’s been really good.”

Like his players, Weaver chose to retain his sense of optimism after the lower than expected finish. “The experience for both guys has been really good,” he said. “They’ll be back next year, and this is only going to help them.”

*Junior Andrew Elliott was not able to compete at State, so Niwot’s team score did not count in the final standings.

Niwot golfers Jack and Sam Hoover finished in 44th and 52nd place respectively at the Class 4A State Championships, held Monday and Tuesday at Raccoon Creek Golf Course in Littleton. Junior Andrew Elliott was not able to compete in the 2-day tournament, so Niwot had to forfeit its team standing. However, the Hoover brothers were eligible to compete as individuals. 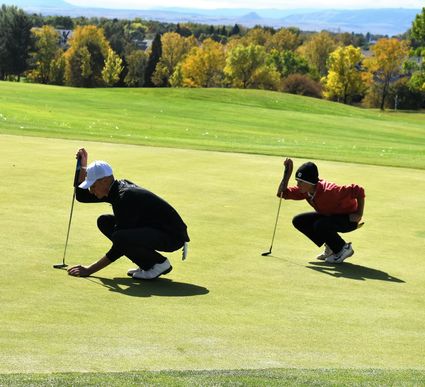 Jack Hoover lines up a putt while Oliver Rotermund of Steamboat Springs looks on.

Hampered by damp weather and a problematic short game, the elder Hoover carded a disappointing 89 (+17) in Round 1. In Round 2, he knocked four strokes off of his score, but finished well out of contention at +30, 29 strokes behind the tournament winner, Darren Edwards of Thompson Valley.

Sophomore Sam Hoover also carded a 89 in Round 1, which he followed up with an 88 in Round 2.