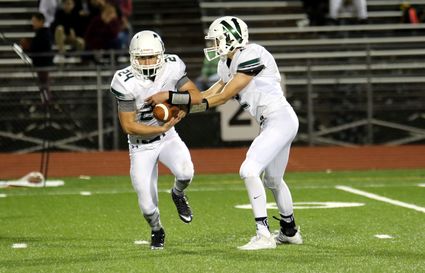 Niwot’s Matt Baun hands off to Anton Sandoval against Skyline.

It was déjà vu all over again for Cougar fans in the opening minutes of the game against the undefeated Skyline Falcons last Friday night. Just like the week before against Mountain View, Niwot’s first three possessions ended in a turnover, a punt, and another turnover, and with just five minutes off the clock, the Cougars found themselves down by double digits.

The rest of the game had a strangely familiar feel as well. A banged-up Cougar defense tried in vain to stop Skyline’s rushing juggernaut, while the offense repeatedly hobbled itself with turnovers and ill-timed penalties. When Skyline’s sixth touchdown of the night activated the running clock just before halftime, Niwot’s eventual 54-point loss was almost a foregone conclusion.

Still, there were some highlights for the Cougars, and head coach Jeremy Lanter said afterwards that he was pleased to see his team persevere despite their challenges this season.

“They’re still making mistakes,” he said. Niwot ended the night with six turnovers and nine penalties. “But those are things at least we can correct.

“We’re trying to build things and do things the right way,” he continued. “We’re not playing our best football, but I’m so proud of just the effort and the attitude, and how they composed themselves on the field.”

Miscues and mismatches on both sides of the ball put the game out of reach for the Cougars early on. Led by former Niwot running back Jeremy Hollingsworth, who ended the night with 149 yards and four touchdowns, the Falcons ran roughshod over a Cougar defense depleted by injuries.

“We were playing a lot of sophomores defensively tonight,” Lanter said after his team gave up more than 50 points for the second straight week. By halftime, Skyline led 43-0, thanks to Hollingsworth and his junior teammate Kyle West, who had two touchdowns. Skyline tacked on 14 more points in the second half, and went on to win 57-3.

Lanter once again acknowledged his team’s shortcomings, but pointed to some positives on the defensive side of the ball.

“[Shane] Timmerman had that good fumble recovery,” he said. The senior linebacker snapped up a drop by Hollingsworth late in the first quarter. “We had good support out of our two sophomore safeties, so I was really happy about that.

“I was very proud of what I saw them do. Their effort is unmatched,” he continued. “Our D-line is working very, very hard. We just weren’t as disciplined as we needed to be tonight.”

In fairness, neither were the offense or special teams. Niwot turned the ball over four times, leading to 27 Skyline points. In the first half, a botched snap to senior quarterback Matt Baun deep in Cougar territory led to a Skyline safety, and then a sixth Skyline touchdown on the subsequent possession.

The special teams also had an uncharacteristically shaky game, giving up two touchdowns, a 70-yard punt return early in the first quarter, and a 94-yard kickoff return to open the third. It was the first points surrendered up by the Cougars’ special teams all season.

Nevertheless, there were also signs of life from the offense, even if that wasn’t reflected on the scoreboard. Working in the spread formation most of the night, Niwot gained 58 yards on the ground, the highest total since Sept. 8. Senior Byron Holmes, taking a turn at running back for the injured Liam Flanagan, picked up 24 yards on nine carries. Baun netted 21 yards on the ground, while senior Anton Sandoval, who left with an injury in the second half, had 13 yards on eight carries.

Niwot also had a bit of success in the air, most notably on the final drive of the night, which culminated in a 34-yard field goal by senior kicker James Lerner to avoid the shutout. Baun and freshman Ayden Bartko were a combined 6-for-13 passing for 52 yards, with long completions to junior Jonathan Colon and sophomore Noah Peña, who also had six solo tackles on the night. Senior Nate Nielsen, another two-way player, had nine yards receiving and another 58 yards in kick returns.

“We had a couple of different sets that we were trying tonight,” Lanter said. “We’ve got injuries that are affecting us and we’ve got eligibility that’s affecting us a bit, so we were trying some guys in some new spots, and they had some success with that. We’re trying to do everything we can to allow kids to be successful.”

On Oct. 6, the Cougars host the Brighton Bulldogs (3-2) for Homecoming. Kickoff is at 7 p.m. at Everly-Montgomery Stadium. 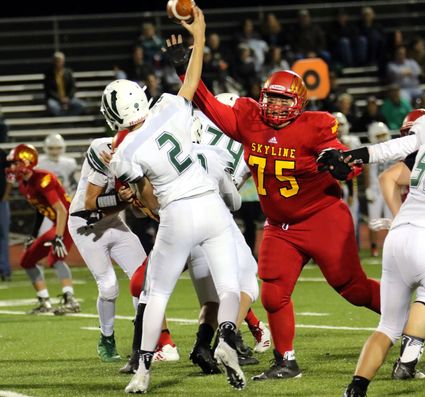