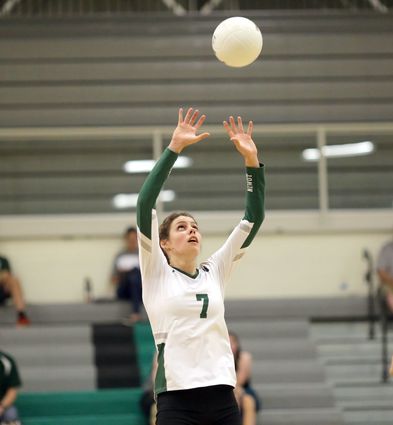 Niwot couldn’t overcome Lewis Palmer on the court three weeks ago, but even a loss to the 4A defending champions has its advantages. When CHSAA unveiled its initial 2017 Ratings Percentage Index (RPI) rankings for the fall sports last week, the Cougars found themselves alone at the top of the list, if just for a few days. The RPI, which ranks teams based on win/loss record and strength of schedule, determines post-season seeding for volleyball, football, softball and soccer.

For Niwot head coach Daisha Agho, the high ranking is certainly praiseworthy, but she cautioned that it’s not necessarily predictive this early in the season. Since the rankings were first released, Niwot picked up two wins against Northern League opponents to move to 9-1 on the season and 6-0 in conference, but dropped to second in the RPI due to Lewis-Palmer’s three wins in the same period, including a sweep of third-ranked Valor Christian.

“Obviously we’re excited,” said Agho, whose team is also ranked second in the CHSAA Class 4A weekly poll, “but I don’t want them to look at that and get too excited. Overall, our strength of schedule so far has really helped us out, it’s put us in the position where we are with the RPI. But I expect us to bounce around up there a little bit still.”

While Agho was pleased with her team’s ranking, she had decidedly mixed feelings about the performance against Mountain View on Sep. 19. The Cougars needed four sets to put down a feisty Lions team that kept Niwot off balance defensively.

That wasn’t much in evidence in the opening set, which Niwot won in impressive fashion 25-11. Mountain View regrouped for the second set, staying right on Niwot’s heels, but eventually fell 25-22. The Cougars jumped out to a 13-4 lead in the third set, but Mountain View took advantage of unforced errors by a sloppy Niwot squad, and battled back to win, 26-24.

The Cougars found themselves on the comeback trail in the fourth set. Down 11-16 after several defensive miscues, an ace by junior Audrey Richard sparked a Cougars’ revival, and Niwot went on to win 25-22.

Agho acknowledged that she was happy to get the win, even if it had been a frustrating game. She said she expects her team’s defensive struggles will work themselves out as the team plays deeper into the season.

Junior Emma Falk led the Cougars with 14 kills, five blocks and three aces on the night. Senior Mackenzie Fidelak was right behind her with 10 kills, three blocks, and 19 digs. She also had 18 assists, second only to setter Katie Hirsh (30). Sophomore Kate Sebesta, back with the team after sitting out last week with an injury, had eight kills and a block. Richard had seven kills, two aces, and 13 digs, while sophomore Emma Shiers also had seven kills and two aces.

On September 21, the Cougars hosted the Greeley Central Wildcats (2-4), beating them in straight sets 25-11, 25-16, 25-12. Fidelak and Falk combined for 17 kills and four blocks, while junior Zoe Gonzales added another four blocks and four kills. Hirsh had four aces and 20 assists on the night, while Fidelak and Richard each had nine digs apiece. 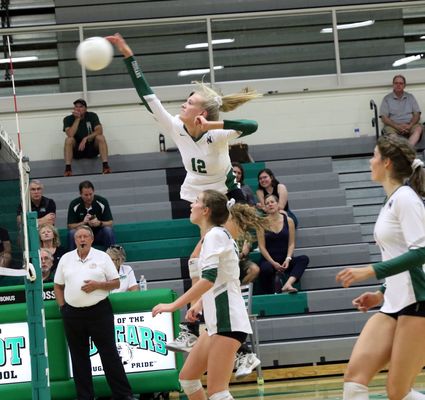 Niwot's Emma Falk goes for the kill against Greeley Central