Student-Athlete of the Week: Shane Timmerman 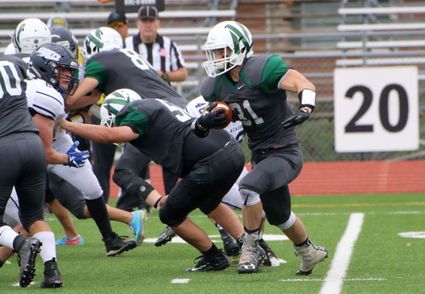 “Today I got my first run at running back and I loved it,”Timmerman said after the game. In his short stint as the Cougars’ running back late in their loss to the Kadets, he gained 12 yards on three carries after Liam Flanagan went out with an injury.

When Timmerman volunteered to serve as backup running back earlier in the week despite having his hands full as a starter on defense and special teams, Niwot head football coach Jeremy Lanter wasn’t very surprised. After all, it wouldn’t be the first time the senior has stepped up for his team this season.

“With Anton [Sandoval] being down this week and our starting running back being a sophomore, we knew we’d have to find a way to get somebody else the football,” said Lanter. “So we went searching and of course Shane jumps at the opportunity to do anything to help other people.”

As just one of 14 seniors on the squad this year, Timmerman has emerged as one of the team’s most effective leaders, according to Lanter. His first love is defense, and as linebacker he has provided a spark for the Cougars so far this year. In three games, Timmerman has 16 solo tackles, just one short of his 2016 total.

“Shane has a lot of passion in how he plays the game of football,” Lanter said. “You can tell that it matters to him what we do in this program and what his play looks like. He’s a kid that really does give you everything he has. He doesn’t take plays off; he doesn’t know an easy way to do things.”

Timmerman admits the last few years as a player in the tumultuous Niwot program haven’t been easy, but he and the rest of the team are ready to put the past behind them.

“The change has been hard,” he said. “There’s been something new every year, whether it’s the loss of a teammate or a new coach. It really challenges the team and it always sets us back, but we’re always trying to move forward, and trying to persevere, and trying to get better at what we’re doing.”

As for the team’s slow start, Timmerman urged patience and said the important thing is for the team to have a “vision of success.”

“It’s a process, you can’t get it all just like that,” he said. “I keep telling the players this so that way if something wrong happens they don’t get down on themselves and beat themselves up. We’re going to get better and how long it takes is how long it takes.”

When he’s not chasing down opposing running backs or receivers, Timmerman also enjoys playing rugby, which he called “football without the pads.” He has his eyes on a collegiate football career, and also hopes to earn a degree in sports medicine.

He admitted that he hasn’t always been the best student, but credited football for providing an incentive for academic achievement.

“Once I started playing football, I started to focus on what’s important, like getting good grades, being better at what I do, going to college and trying to be successful in life.”