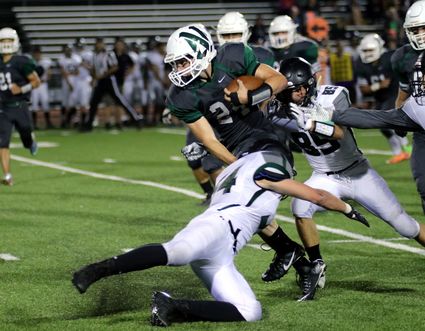 Although the Cougars didn’t come away with a win in their home opener against the Summit Tigers last Friday night, Niwot head coach Jeremy Lanter has no doubt his team is headed in the right direction.

After reviewing game film of Niwot’s 27-15 loss to the Tigers, the coach said he saw improvement across the board. “We did so much better. We grew in just about every area of what we were doing.”

Led by sophomore quarterback Noah Peña, the Cougars’ offense generated 213 total yards, nearly double their output the week before. They also put 15 points on the board, courtesy of rushing touchdowns from sophomore back Liam Flanagan and senior back Anton Sandoval, who ran it in late in the first quarter to give Niwot an early 7-0 lead.

“The touchdown was set-up by a really big catch that Nate Nielsen had for us to get us down there,” said Lanter. The senior receiver, who also starts on defense, had another big night for the Cougars, with 68 yards on six receptions.

Sandoval finished the night with 18 carries for 57 yards, bringing his season total to 124. Peña was 9-for-15 with 101 yards in the air and 31 rushing yards. Though improved, Lanter said the rookie quarterback still has some adjustments to make.

“I have nothing but faith in his ability to do what we’re asking him to do,” Lanter said. “He’s very young, and he’s learning kind of on the fly how to play that position at that level.”

Defense continued to be a bright spot for the Cougars, despite what Summit’s 27 points suggest.

“The defense played well again,” Lanter said, explaining that the Tigers’ 20-point run in the second quarter was due to offensive turnovers and not a defensive breakdown. “They stopped Summit from running the football out of their main offensive sets…They did a really nice job.”

The coach singled out senior defensive players Brandon Barton, Lisandro Lara and Shane Timmerman for special recognition after they rendered the Tigers’ running game largely ineffective on the night.

“Down at the end we’re trying to fight our way back, and anytime we called Brandon Barton’s number, he would make a play for a loss in the backfield. That’s a huge game changer.”

“Shane Timmerman is a very special athlete,” Lanter said of the Cougars’ 6’1” defensive end. “He does some phenomenal things for us, but his attitude and effort are unmatched by just about anybody on the football field.”

While there is certainly a lot of encouraging news out of Friday night’s performance, trouble spots remain, primarily on offense. Though they got a boost from the early score, the Cougars were unable to carry their momentum through the rest of the half, and Summit capitalized on Niwot’s penchant for mistakes. All told, Niwot fumbled a total of seven times on the night, which Lanter chalks up to inexperience.

“A lot of it is just that we’ve got some young kids in key positions,” he said, noting the high number of sophomore starters on both offense and defense. “It’s taking time to find each of those pieces and how they work together and get kids caught up in those game-time decisions.”

Lanter urged patience with his young squad, noting that their improvement so far this year is encouraging, even if it doesn’t look like it from the outside.

“I’m really pleased with the steps that we took and the progress we’re making,” Lanter said. “We’re getting better, and us making seven mistakes on the field, and that being the difference in the football game, that hurts, but I told the kids it’s not as bad as you think it is. We’re playing really good football. We just need to figure out a way to make those seven plays.”