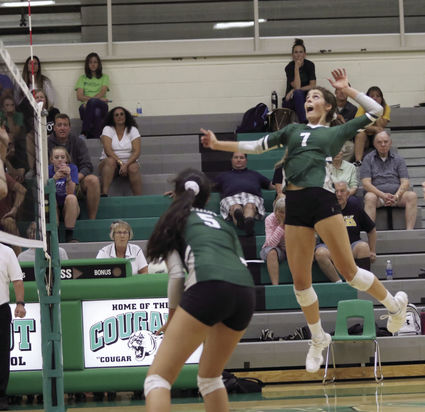 Photo by Ed Navarro Niwot’s Mackenzie Fidelak (7) goes for the kill as Zoe Gonzalez (5) looks on against Thompson Valley.

Going into the 2017 season, Niwot’s new head volleyball coach Daisha Agho counted the Silver Creek Raptors among the potential roadblocks on her team’s path to the state title. As the Cougars’ chief rival for the Northern League title this year, Agho knew the outcome of this highly anticipated early season matchup would set the tone for the rest of the season. So when the Cougars swept the Raptors in front of a boisterous home crowd last Thursday night, Agho was more than a little relieved.

Niwot took control early in the match and didn’t let up. Led by senior Mackenzie Fidelak and junior Audrey Richard, the Cougars promptly ran up an eight-point advantage in the first set, forcing Silver Creek to take a time-out in order to regroup. Niwot extended the lead to 11 points late in the set after a kill by sophomore Kate Sebesta, but the Raptors rattled off five straight points in response to close the gap to six points. Fidelak’s kill on the next point, however, started a three point Cougar rally that ended the set at 25-16.

The Raptors kept pace with the Cougars in the second set, at one point pulling ahead 13-11. Niwot battled back to tie the game at 16-16, then pulled ahead by two after two straight kills by towering junior Zoe Gonzales. Niwot held on to win 25-23. Keeping the throttle down for the third set, the Cougars quickly claimed another eight-point lead which they extended to 12 before finally nabbing a 25-16 victory.

Agho wasn’t shy about praising the Cougars’ performance against the Raptors, who were ranked eighth in the CHSAA preseason poll.

“I was really proud of the way they came out and just got down to business,” she said of her team, which was ranked sixth in the same poll. “There was no fluff, there was no playing around. It was, ‘We’re here to play volleyball, we’re here to win,’ and they did just that. It was awesome.

“Silver Creek is tough,” she continued. “I knew it was going to be a challenge, especially with Rylee Anderson on the outside. They switched some stuff up on us tonight, but the girls were able to adjust very well, and it didn’t even rattle them at all.”

Fidelak, who ended the night with 12 kills on 17 attempts for a 64.7 hitting percentage, agreed with Agho’s assessment of the team’s mindset. Following the match she said, “We just went out with the mentality that we’re going to take care of business as fast as we could, and we did.”

In turn, Agho praised the standout for more than just her performance on the court.

“She’s the leader when it comes to the fire,” said the coach of the hard-hitting senior, whose clutch kills in the first and second sets changed the game’s momentum. “She’s wanted this game for a long time. It’s been the talk of the season so far, and she really got this team fired up about it.”

The Cougars had contributions from many different players, including Niwot’s other imposing hitter, junior Emma Falk, who had seven kills and three aces on the night. Sebesta, who had key hits in the second and third sets, ended the match with five kills and four aces.

Both Fidelak and Agho singled out Richard for her strong start, with the captain saying, “I think she really set the tone, especially early on in the night when she had a bunch of kills and kinda got us going.” The junior netted a personal-best five kills and three aces in the win.

Though impressed with her team’s win, Agho cautioned that there’s still a long season of volleyball ahead. Saying the team talks about staying “confident, not cocky,” Agho believes her players are mature enough to put the emotional win behind them and take the rest of the schedule just as seriously as they did the Raptors.

“There are still some really good teams that we’re going to see,” she said. “We’ll see Silver Creek again at their place, which will be a different atmosphere also.

“This team is very good about understanding the situation, knowing when it’s good to be confident and have some energy, and when to get down to business,” Agho continued. “We’ll get back to practice tomorrow…. Our goal is to be state caliber and we’re not quite there yet.

The Cougars kicked off their season on Sep. 5 against the visiting Thompson Valley Eagles, winning in three sets, 25-20, 25-15, and 25-19. Over the weekend, the Cougars competed in the annual Lewis Palmer Invitational, where they picked up wins over University and Montrose, but fell to defending state champion Lewis Palmer in the final rounds. They picked up their third win of the weekend over Bayfield in a consolation round. After the first week of the season, the Cougars are 4-1 overall and 2-0 in conference. Up next is a pair of road matches, at Northridge on Sep. 12 and at Longmont on Sep. 14.