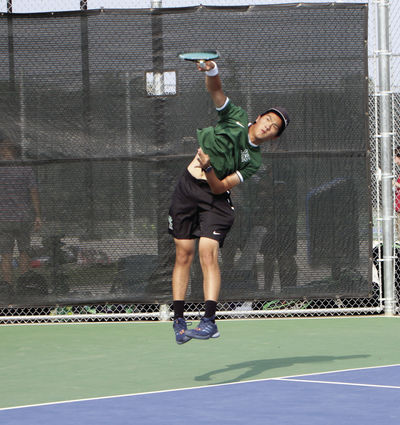 The Niwot boys tennis team continued its romp through the Northern League last week with consecutive 7-0 victories over Northridge and Silver Creek.

On Sept. 5, Niwot hosted Northridge at Affolter Park in Longmont, one of the Cougars’ temporary homes while the Niwot High courts are being resurfaced. Niwot won all seven matches in straight sets, dropping just 13 of the 84 games. Freshman Neil Wilcox remained unbeaten on the year, after his 6-0, 6-0 victory over Northridge senior Bryan Decker at No. 1 Singles.

“I thought we played okay,” said Niwot head coach Miikka Keronen after the Cougars’ second straight shut out of a league opponent. “We are not results oriented at this stage of the season, we are performance oriented, so even though 7-0 sounds great, we can play better.”

“Today, I feel we played better,” said Keronen following the meet against a relatively young Raptors team. “Silver Creek is super talented, but we had really good practices this week.”

Keronen is happy with the team’s overall direction, even the third and fourth doubles teams, which have struggled in the early going. Last week, he moved freshman Xavier Moy to No. 3 doubles with Anton Levrouk, and paired junior Jon Lee with senior Peter Lee (no relation) in the No. 4 spot, because they “gel better,” according to Keronen.