Student-athlete of the Week: Jason Rodriguez 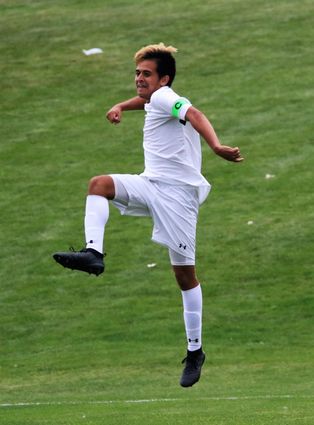 The first thing you notice about Niwot’s Jason Rodriguez is the bright shock of unruly blonde hair that falls over his forehead. The second thing you notice is that he is one impressive soccer player.

In three games for the Cougars this season, the senior captain has scored three key goals, including both in his team’s 2-1 win over non-conference rival Holy Family on Aug. 31. He also had the game-winner in Niwot’s 3-1 victory over Skyview in its season opener. His explosive speed, combined with his dazzling footwork and creativity on the ball make him a threat to score any time he has possession.

“He’s fun to watch,” said Niwot head coach Stephen Dimit of his second-year varsity forward. “The game is slowing down for him, and he’s flat better than a lot of the guys he’s going one-on-one with.”

Rodriguez has been motivated this season by one simple goal: a deep run in the Class 4A playoffs. He admits that last year’s first round loss to Evergreen in a shootout still stings, so he and the Cougars have committed to preventing a third consecutive early post-season exit in 2017.

“It’s a team goal to come out stronger and have a better season than last year,” said the right-footed front man. “That’s what keeps me going.”

Rodriguez has been playing soccer “as long as I can remember,” and it doesn’t leave time for much else. When he’s not out on the pitch with the Cougars, he plays with FC Boulder up to five days per week during the offseason. He plans to play soccer in college, and is currently interested in several schools in Nebraska.

In the classroom, Rodriguez is pursuing a business-centered course load, in preparation for a business degree in college. His course load includes Intro to Business, Marketing, and his favorite course, AP Economics. Outside of school and soccer, Rodriguez enjoys spending time with his friends and family.