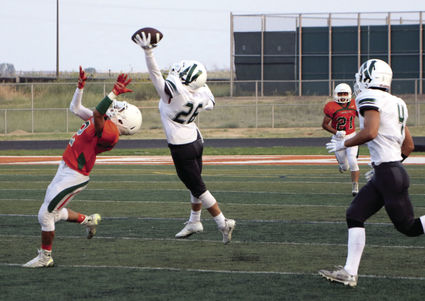 Photo by Ed Navarro Niwot’s Liam Flanagan (26) reaches for a pass as Nate Nielsen (4) looks on against Adams City.

Coach Jeremy Lanter and his new look Niwot Cougars stumbled just a bit coming out of the gate last Friday night, with an 18-0 loss to the Adams City Eagles in their season opener.

Led by rookie quarterback Noah Peña, the Cougars fumbled three times and gained less than 75 total yards in the shutout. Senior back Anton Sandoval had 62 yards on the ground and was responsible for almost all of Niwot’s sporadic offensive highlights.

After the game, Lanter readily admitted that the Cougars have some work to do on that side of the ball.

“We have to learn how to control our snaps as the game goes on,” Lanter said after his team mishandled the exchange at least three times in the second half. “We have several kids starting on both sides of the ball, and it was easy to see the wear and tear as the game went on.

“We’re in the process of still learning the offense,” the rookie head coach continued, “and I think we can only get better at doing those things.”

Not that it was all bad news on offense, according to Lanter: “We got better push than we’ve seen out of our offensive line since I took over back in the spring.”

He was also happy with the performance of his sophomore QB, despite the less than superstar stat line in the season opener.

“I thought Noah did fantastic,” said the coach of Peña’s varsity debut. “We wanted this first game to ease him into things and not throw him to the wolves and keep him in a position of safety if we could. He’s such a remarkable leader in how he responds when difficult things happen. The guys are naturally going to follow that positivity and that instinct.”

If there was a bright spot for the Cougars in the loss, it was on defense. Led by seniors Nate Nielson and Shane Timmerman, Niwot held Adams City scoreless through the first half and had the Eagles scrambling in the backfield a number of times. In the second half, the coverage team came up big with two key interceptions, saving the Cougars from an even more lopsided loss.

“It’s tough when you have a lot of your snaps, most of your snaps, taken with your back up against the goal line,” Lanter said. “They held very well, and they played great defense.”

“Shane Timmerman showed the most leadership of the kids I saw tonight,” continued the coach, describing one of his starting defensive ends. “He made a lot of great calls defensively, and made some huge sacrifices of himself in doing so. [Nate] Nielsen, this is his first week playing both ways as a starter, and he bought in very, very well and worked very hard and was rewarded with an interception.”

Not all of Niwot’s challenges were on the field Friday night, however. Several times after a turnover or broken play, players threw equipment or yelled at coaches and teammates on the sideline.

“Controlling emotion is always tough for kids” Lanter said. “That’s something we’re going to have to help them to understand; when is the right time to have those emotions, and when to control them both on the field as well as on the sideline.”

The Cougars will have a chance to redeem themselves in their home opener against the Summit Hilltoppers (0-1) on Sep. 8 at Everly-Montgomery Field. 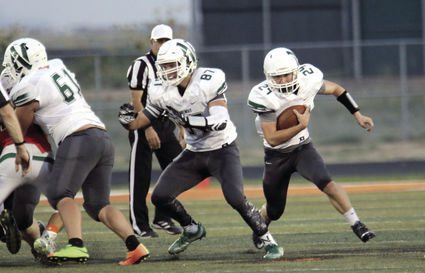