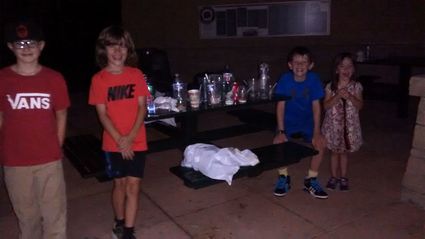 Courtesy Photo Cormac Easter (in the orange shirt), and several other Niwot kids with the amount of trash and recyclables they cleaned out of the Childrens Park recently. Their efforts are helping keep the space clean for everyone.

A group of youth took notice of a trash problem in the Niwot Children’s Park and decided to take action.

For the last month or so, they’ve met at the park after Rock & Rails concerts to clean up the trash left behind.

“What we’ve been doing is me and my friends have trash grabbers and other supplies,” Cormac said. “We distribute them so people can use them to clean. If we see any trash we can pick it up without using our bare hands.”

They gather the trash before sorting into waste, recyclables and compostables.

Cormac said he didn’t like seeing the park dirty.

“I play there most of the time,” Cormac said. “My favorite part is probably the zipline, the water fountain or the arena.”

His mother, Melinda Easter, had mentioned the idea of a clean up crew at the park, and Cormac ran with the idea.

“My mom had the idea that there could be a club that cleans up every night,” Cormac said. “It sparked me and we went on from there.”

Rock & Rails has a group of middle school students called the Gargoyles, who sit on top of the recycle and compost bins at Whistle Stop Park, and help people figure out the proper bin and clean up after.

“But there are no receptacles in the Children’s Park,” Melinda said. “We thought it would be nice to have a group that does that at the park. That’s how it got started.”

Along with Emmett, several other elementary school kids have helped out.

“Last time we got like five people to help,” Cormac said. “Sometimes there were two people, me and my friend Emmett, and sometimes three.”

Cormac wants to make a sign-up sheet so people know who is going to clean the park that day. He’d also like to get T-shirts made for the Owls.

More volunteers are always welcome, Melinda said, and the sign-up sheet would make for an organized effort.

“He would like to have a group of people that could sign up for particular nights and go over to the Children’s Park and clean it up,” Melinda said.

Cormac added that it doesn’t take a whole lot of people, but more hands will get the job done faster.

“We don’t need tons and tons of people,” Cormac said. “But we need more people than we have. We still get the job done, but when we don’t have very many people it takes awhile.”

Crystal Wise, who was a member of the park building committee, said she had heard of the Owls and thinks it’s a great idea for the community.

“It is really exciting to see the kids that use the park want to play a role in maintaining it and keeping it nice,” Wise said. “I think that’s a really awesome step that Cormac did.

“There are so many adults that are leaving trash and causing some of the issues around the park. To see a kid say, ‘Hey, we’re going to do something,’ is rare. These kids deserve some recognition.”

Any elementary school-aged kids who want to volunteer to join the Owls can contact Melinda at Melinda.easter@gmail.com.