Softball: Johnson shines on the mound for Cougars 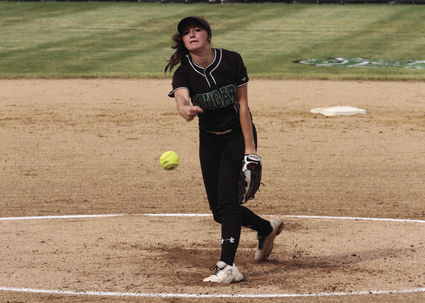 In three seasons with Niwot softball, there isn’t a position that senior Jaila Johnson hasn’t played. Though a native of the infield, she has taken her turns in the outfield, done a stint as relief pitcher, and was even pressed into starting catcher duty as a sophomore. After this week, the Western Nebraska-bound senior can add one more position to her resume: starting pitcher.

Johnson was a bit rusty in her return trip to the mound in the Cougars’ season opener on Aug. 22, but was able to get away with some mistakes against a struggling Wildcats program that hasn’t won a game since September 2014. In a five-inning rule-shortened game, the right-hander allowed two runs on five hits, and struck out six while walking just two. Though she came away with the win, Niwot head coach Bobby Matthews is glad his main hurler had a chance to work out a few kinks before the Aug. 29 date with powerhouse Mountain View.

“It wasn’t her best day,” Matthews said frankly. “She had a hard time adjusting to the umpire’s strike zone. She had to go to different pitches, not her bread and butter, and some floated over the middle and were hit pretty hard.

“But she got her job done, and offensively she was great. She also showed great leadership today.”

Johnson helped herself out at the plate, going 4-for-4 with two extra-base hits and three RBI. She also scored three of the Cougars’ 15 runs on the day, leading them to a 15-2 victory.

“We started off on a great note,” said Johnson following the Cougars’ eighth consecutive season-opening win. “I am pretty confident in my team so far, and I hope it carries through to the rest of the season.”

The 12th-grader was happy with her performance on the bump, but also grateful to her supporting cast in the field.

“It’s pretty good to get back out there,” Johnson said, “especially since I don’t feel like I have to do it by myself because I have my defense behind me and I trust them.”

Matthews was happy to get a win in the home opener, but also acknowledged his young, inexperienced team has “a lot to work on.”

“The kids who should do well, did do well,” said Matthews. “Seeing some kids come through in some crucial situations was also good.”

Sophomores Nikki Sims (ss) and Reagan Wills (c) picked up where they left off last season, combining for four hits, four RBI, and three runs, including a triple by Wills. Junior Savannah Rafkin (cf) drove in a run and scored two runs on two hits, while her junior teammate Caitlyn Schriener (lf) also had a pair of hits and two RBI.

Matthews was especially pleased with his rookie Kaya Shell, making her competitive debut in Tuesday’s game. “She’s never played before and she got a hit and an RBI,” said Matthews. Overall she did an amazing job.” In three plate appearances, the freshman right fielder lined out to the pitcher, walked, and then hit a single to score Schriener.

Niwot picked up its second victory of the year on Aug. 24 against Centaurus, another struggling program that hasn’t had a winning season for several years. In their second rule-shorted game, the Cougars blasted the Warriors 24-3, led by Johnson, who had three hits and another five RBI. In her second start, Johnson went 3.2 innings, giving up two hits and striking out five.

Sophomore Esme O’Rourke made her season debut on the mound in relief, and also had a huge day at the plate, going 3-for-5 with five RBI. Wills and Sims were once again explosive, with a combined seven hits, eight runs, and four RBI. Senior Aleris Law, who was shut out offensively against Greeley Central, had two hits, two RBI, and scored three runs.

Up next for the Cougars are the Mountain View Mountain Lions, who are expected to challenge Silver Creek for the Northern League title this year. Over Labor Day weekend, the Cougars will play five games in two days at the Erie Festival of Champions tournament.