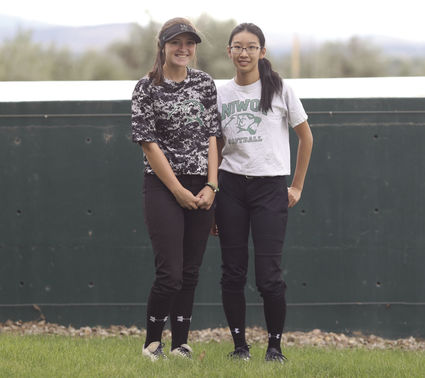 Niwot head softball coach Bobby Matthews didn’t use the term “rebuilding,” but after losing seven varsity players to graduation or transfer, the seventh-year head coach knows his team faces an uphill battle in the loaded Northern League this season.

“We’re very young, and we’re very inexperienced,” he admitted. With just two seniors, two juniors and only 14 players total, Matthews will be looking to an exciting but still unproven sophomore class in the fight for post-season tournament slots against league powerhouses Silver Creek and Mountain View, both among the top ten in CHSAA’s Class 4A preseason rankings.

Suffice it to say, Matthews’ expectations for this year are modest, but that doesn’t mean there’s no room for optimism.

“We’re focused on us getting better every day,” he explained. “If we do that, I think that we’ll have success.”

The Cougars will be led this year by senior co-captains Jaila Johnson and Aleris Law, both four-year varsity starters who were with the team during their playoff runs in 2014 and 2015. Johnson, who recently committed to play at Western Nebraska next year, will be the team’s primary pitcher, her fourth starting position in four years.

“She’s actually played every single position at Niwot,” including starting catcher during her sophomore year, explained Matthews. Last year, she returned to the more familiar territory of the infield, mostly at third base. Her most recent pitching experience came in 2015, when she gave up three runs but had four strikeouts in three relief appearances.

Johnson’s sole senior teammate Law will be taking her place at third base, following stints at second, shortstop, and the outfield. Law hit .304 and scored 23 runs for the Cougars as a junior, and also led the team in triples, with three.

Matthews will be looking to his oldest players for leadership, and thinks the pair’s hard work and team-first attitude sets a quiet yet powerful example.

“Jaila and Aleris are definitely leaders, and the other girls see that,” said Matthews, noting that both have been willing to step-up and learn new positions as needed over the years. “They’re just not very vocal - they’re leaders without being vocal.”

The seniors will be joined by juniors Savannah Rafkin (CF), and Caitlyn Schreiner (LF), who is new to the varsity team. As a sophomore, Rafkin scored 14 runs and had 10 RBI, and Matthews expects her to have “a breakout year, especially offensively.”

Completing the starting lineup is a sizable sophomore contingent, headed by Reagan Wills, who hit .491 as a ninth-grader, with 27 hits and 25 RBI. Matthews also values her as a leader among the younger girls, albeit one with a bolder style than her senior counterparts.

“Reagan had an amazing freshman year,” said the coach of his starting catcher. “I look for her to really be the catalyst in the middle of our lineup. You’re going to hear her every single game.”

Sophomores Nikki Sims (SS) and Calista Law (2B) are also back with the team this year. In 2016, Sims had 12 hits in 36 at-bats, and also scored 12 runs. He expects both to be improved, and noted that Law, Aleris’ younger sister, had “a good summer,” with an appearance at the American Softball Association (ASA) U14 national championship tournament with her club team. They will be joined by newcomer Esme O’Rourke, who will be splitting time between first base and relief pitcher for Niwot this year. One notable name missing from the sophomore list is standout Madysun Vaughan, who had 30 hits her freshman year, but transferred to Erie over the summer.

“Overall, I think our sophomores will do really well,” said Matthews. “I look for good things from that class.”

Matthews isn’t naïve to his team’s lack of depth, however. With enough players to field just one team and almost no pitching experience remaining, he’s had to get creative when filling out the lineup.

“Everyone’s playing a different position,” explained Matthews. “But that’s what high school ball is about. I think we’ll have strong hitters one through six or seven, but we’ll also have some girls that just need to do their job moving runners.”

The Cougars kicked off their season on Aug. 22 at home against Greeley Central. The young squad will face their first test on Aug. 29, when they host 8th-ranked Mountain View.