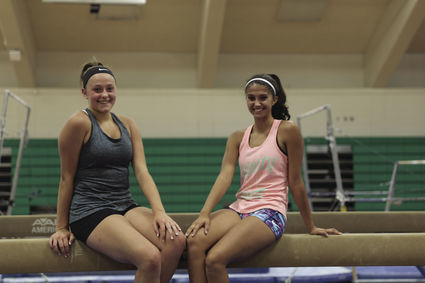 Niwot gymnastics head coach Marisa Purcell believes she has all of the pieces in place for another serious run at this year’s Class 4A state title. With three proven all-around performers and a crop of talented newcomers, the Cougars should once again be in the mix come state competition in November. But as the coach of a very diverse group of perfectionist athletes, Purcell knows the road back to state championship glory depends on more than just individual talent and hard work.

Leading the charge for the Cougars this year are seniors Lindsay Chohon and Lilli Martin, two of the Cougars’ top gymnasts. Chohon scored 36.25 in the all-around competition at last year’s state meet, which was good for a sixth-place overall finish. Hoping to break into the top five in 2017, Chohon and the coaching staff added some difficulty to her routines during the off-season, which should give her a sizable points boost.

Martin, who is Purcell’s daughter, will also be looking for a return to the finals podium this year. After finishing fifth at state in vault and floor as a sophomore, Martin started competing in the all-around competition as a junior. She took eighth at state in 2016, and is looking to move up.

“She also has some new skills this year,” said the coach. “We’re hoping she’s more confident this year in her routines. With a year of all-around under her belt and with some confidence in herself, she should be able to execute better.”

As for her relationship with Martin both as a mother and coach, Purcell said that she sometimes has trouble keeping the roles separate. “I’m definitely the hardest on her in the gym, there’s no doubt about that,” explained Purcell. “My expectations for her are so high that they sometimes become unrealistic. But I’m with her all the time, so I know what she’s capable of.”

Chohon and Martin will be joined in the all-around competition by sophomore Taylor Green, now in her second year with the team, and freshman Grace Stephenson, who is still perfecting her vault routines. Other returners include junior Maddy Brodie, who competes mostly on the uneven bars, and sophomore Amber Nusser whose specialty is vault. Purcell will be assisted this year by Maddi York, who is also in her second year with the team. Overall, Purcell said she is pleased with the composition of her team and has every confidence this squad is built to contend for a title.

At least on paper. Purcell said that her biggest coaching challenges are building cohesion and team community. Even with the right personnel in the right events, high school gymnastics introduces team dynamics to an individual sport, which is a difficult transition for some girls. “These girls compete against each other year round, and now they’re trying to compete together?”

What’s more, Niwot has the only gymnastics team in the district, so Purcell’s team draws students from every school in St. Vrain Valley. Her 2017 squad, for example, features gymnasts from seven different schools. This is another underappreciated obstacle when trying to build team cohesion, said Purcell.

“My focus especially in these first few weeks is just getting them to come together as a team and be teammates,” she said.

The Cougars open their season on Aug. 30 at home against Fort Collins. On Sep. 6, they hit the road for a dual at Loveland.