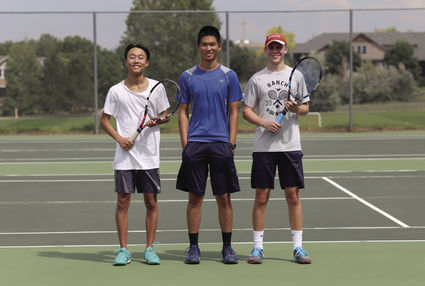 The Niwot boys tennis program lost seven of its varsity players from 2016, but head coach Miikka Keronen sees no reason why that should keep the Cougars from making another state title run in 2017.

“We don’t accept being mediocre,” said Keronen, who had to replace two of his three top singles players and four of his doubles players. “It might take six days a week instead of five days a week, but we’ll figure out how to do it with the kids we have.”

That has been Keronen’s philosophy in his fourteen years of coaching boys tennis at Niwot, and it’s hard to argue with its success. Luckily for Keronen, the Niwot area also seems to attract an outsized share of gifted tennis players who have a knack for showing up just when they’re needed most. This year, three “super talented” freshmen will pick-up where last year’s departing seniors left off, giving Keronen and and assistant Aimee Keronen not just the pieces they need to win this year, but also the building-blocks of a potential state title winner.

Playing No. 1 singles for the Cougars this year is newcomer Neil Wilcox, son of head junior varsity coach Keith Wilcox, and one of Keronen’s “super talented” freshmen. In his typically understated way, Keronen suggested that Wilcox could be a serious contender at state as early as this year.

“The 4A state title is pretty open,” said Keronen, noting the graduation of three-time defending champion Casey Ross of Kent Denver. He then suggested that Brent Finan of Peak-to-Peak would be a strong competitor for the 2017 championship, but then slyly added. “Our freshman, he’s not bad either. If this isn’t his year, then you’ll definitely hear about him. But he’s so talented, we’re hoping it’s this year.”

Niwot’s two other varsity freshmen will be playing doubles this year. Ninth-grader Sam Keronen, son of the head coach, will be paired with junior Riley Mulshine in the No.1 doubles slot, while Xavier Moy will be with senior Peter Lee at No. 4. “All of our freshman should have an impact right away,” said Keronen.

The Cougars are also returning a strong core of varsity state-qualifiers, including junior Riley Black, who gives the Cougars a tough veteran presence at No. 2 singles. Black took second in the No. 3 singles state bracket last year, the best finish of any Niwot player at the state meet. Junior Manas Saini, in his third year with the team, has captured the No. 3 singles slot.

In doubles, sophomore Cruz Culpepper is returning to the No.2 team, where he has been paired with senior Patrick Xiao. Last year, Culpepper and Mulshine took fourth overall in the state No. 2 doubles bracket. Culpepper is also expected to contend for a 4A state title as a top runner on Niwot’s cross country team this season. Rounding out the squad are sophomore Anton Lavrouk and junior Sam Bickham at No. 3 doubles. Last year, Bickham and his No. 3 doubles partner Andrew Thomas advanced to the semifinal round in the state meet, but lost in the playback round and ended up fourth overall.

Keronen knows he’s fortunate to have such a depth of talent on his roster year in and year out. The Cougars have won the Class 4A regional title eight years in a row, and are coming off of their third consecutive top-three finish at state. Even though he has a lot of vacancies to fill this year, the coach fully expects to be among the top-three teams at state once again.

The Cougars kicked off their 2017 season on August 22 at Thompson Valley. Their first home match is scheduled for Aug. 24 against Boulder.