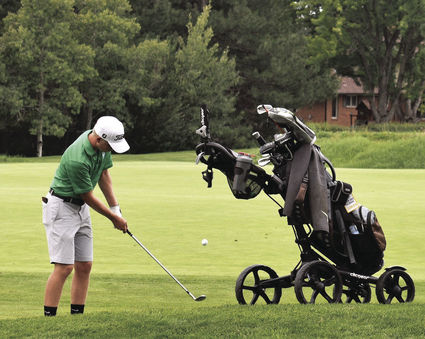 Photo by Jocelyn Rowley Junior Andrew Elliott chips onto the green on the third hole at the Olde Course in Loveland in Northern League Event #1 on Aug. 10.

The Colorado weather claimed an early victory in the 2017-2018 high school athletic season when heavy rain and lightning forced suspension of play in the Niwot boys golf team’s season-opening tournament at the Olde Course in Loveland on Aug 10.

Niwot number one Jack Hoover was +4 through eight holes when play was stopped, with a birdie and two pars, but also five bogeys. Junior Andrew Elliott, Niwot’s number two golfer, started his round with three-straight double-bogeys, but parred two of his last three holes, ending with a +9 through eight holes. Sophomore Luke Martinez, making his varsity tournament debut, was +12 after six holes, and freshman Luc Blondeau, making his competitive debut, was +14 through five.

“I talked with him [Elliott] on the number four tee and told him to don’t think about his score and focus on making good shots,” said Niwot head golf coach Ed Weaver. “He said it helped and he was playing better.” 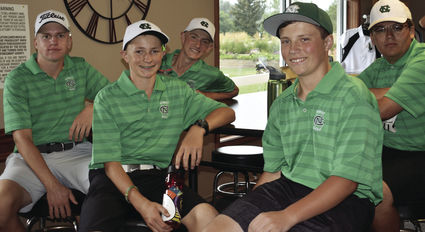 In a pleasantly surprising turn of events, Niwot’s number three golfer, sophomore Sam Hoover, had the Cougars’ best score when play was suspended, with pars on five of his first six holes. However, he was +3 after six, thanks to a triple-bogey on the third hole.

“He’s improved a lot over the summer,” said Weaver of his number-one’s younger brother. “His swing’s better. He hits the ball further. He’s more confident. It’s a nice transformation for him.”

Because the boys golf season in so short, the tournament won’t be rescheduled. The Cougars wasted no time getting back on the course, however, with back to back tournaments at Greeley’s Highland Hills Golf Course on Aug. 14 and 15. On Aug. 17, the boys head to Eaton for an invitational, then back to Greeley on Aug. 18 for Northern League event #3 at Boomerang. On Aug. 22, Niwot hosts the season’s fourth league event at Twin Peaks golf course in Longmont.