Student of the Week: Amber Nusser 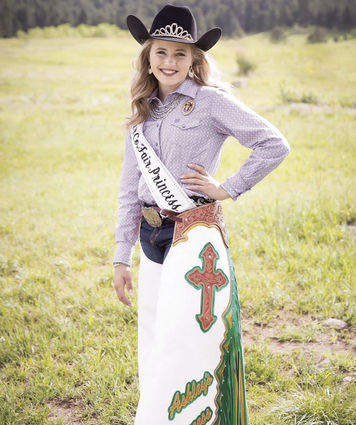 Courtesy Photo Amber Nusser will be a sophomore at Niwot High School next year.

Horses have been an important part of Amber Nusser’s life from an early age. An avid rider ever since her family’s move to a farm near Hygiene, the Niwot High sophomore-to-be has accumulated an impressive list of accomplishments and accolades as a member of the Boulder County 4-H program. Next week, the talented equestrian will complete a one-year term as Princess for the 2017 Boulder County Fair and Rodeo.

Nusser joined Boulder County 4-H at age nine, and has devoted the bulk of her time in the program to the Horse Project, though she has also participated in photography and the Market Beef program. She has completed advanced level classes in Showmanship, English Hunt, English Dressage, and Western style riding, and has also received training in Ranch Horse. Over her five years with 4-H, Nusser has competed in dozens of county and state events, and took home High Individual Overall honors in the Horse Judging contest at the Colorado State 4-H Conference last month.

As a 2017 Boulder County Fair Princess, Nusser served as “ambassador” for Boulder County at several local and statewide events over the past twelve months, including the Niwot 4th of July Parade, where she met Supreme Court Justice Neil Gorsuch.

At next week’s 148th annual Fair, Nusser will spend her time greeting guests and promoting exhibits when she’s not busy competing in the fair’s equestrian events with her horse Bill, whom she’s had for about a year.

Believe it or not, horses aren’t Nusser’s only passion. A straight-A student on Niwot’s pre-IB track, she is an avid learner, and loves the interdisciplinary integration of the IB curriculum. She points to Mrs. Feiran’s honors English class as her freshman year favorite. She’s also a member of Niwot’s varsity gymnastics team and the junior varsity track team.

She admitted that maintaining a busy school schedule and making time for 4-H was “a challenge” last year, but said careful time management and prioritizing made it manageable. For Nusser, the busy schedule also paid off in other ways, especially as a new student a Niwot.

“It really made my school year a lot better,” she said, after noting that she plans to maintain a busy schedule for the foreseeable future. “I met a lot more people, and was more integrated into the school’s culture.”

After for what she might do after high school, she hasn’t given that too much thought, but hopes to pursue a career in biology or a science related field. One thing she does know is that her future will “definitely” include horses.