Gunbarrel Brewing Company is on tap 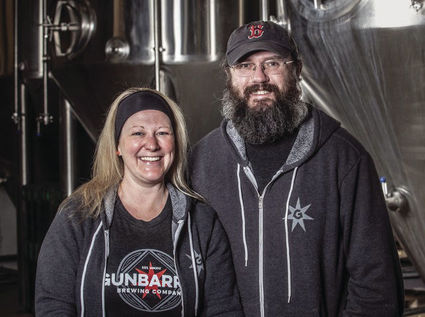 Courtesy Photo Jamie and Marie Fox are the owners of Gunbarrel Brewing Company. The new tap room is now open with a variety of brews to choose from.

Located at 7088 Winchester Circle, the new tap room is owned by Jamie and Marie Fox.

Jamie has many years experience as a brewmaster, while Marie runs the business side.

The first day was a hit, several hundred people stopped by for a brew or to grab a bite to eat at the food truck stationed outside.

“It was terrific,” Marie Fox said. “We killed it, which was amazing because we just announced it the day before.”

There will be a food truck there seven days a week, and after their big Fourth of July event they will also have food trucks for lunch on weekdays and brunch on the weekends.

“The trucks are going to be different daily,” Marie Fox said. “People were thrilled with last week’s truck, and I think they’ll like the other ones we have lined up.”

They are also working on a lineup of live music for the weekends, and will have the “Geeks who Drink” trivia on Wednesday nights starting at 7 p.m.

Jamie currently has 10 beers on tap, a number that increases weekly. Marie said that they have a beer to fit any taste. They also offer non-alcoholic beverages.

“For hop-heads we have three IPA’s right now and we’re about to have four,” Marie Fox said. “There is something for everyone. All of the beer here is our own. He’s brewing for sure. He’s working on an experimental IPA today, but he’s at it.”

Aside from the food trucks, they have pre-packaged foods like local smoked beef, peanuts and popcorn.

Entertainment is not lost either. The game room is ready to go with pinball, arcade games, pool on the way, darts, giant beer pong, ping pong, foosball and corn hole outside.

“We’re really looking forward to filling up our calendar with events and concerts,” Marie Fox said. “We want to give Gunbarrel some much-deserved excitement.”

Marie said that the support from the community so far has been great, many have even spent time helping get the place up and running.

“It’s been awesome and it really warms my heart with the Gunbarrel community,” Marie Fox said. “They’ve been by on a regular basis helping us do all kinds of things. It’s really become a brewery that’s for the community and of the community.

“So many people have been involved. They’ve been here doing everything from sanding to painting and cleaning — it’s just been phenomenal. Everything is going better than expected and that’s in a large part due to the volunteers that have been down here.

“People have been just ducking their heads in and asking if we need anything, bringing their tools down … that’s amazing. It’s been a dream, I couldn’t imagine that ever happening.”

“Not to sound cheesy, but it is really heartwarming,” Marie Fox said. “To have all of the people come in from our neighborhood coming in, all of the people who said they’ve been watching on social media and said they couldn’t wait for us to open. It’s really, truly overwhelming.”