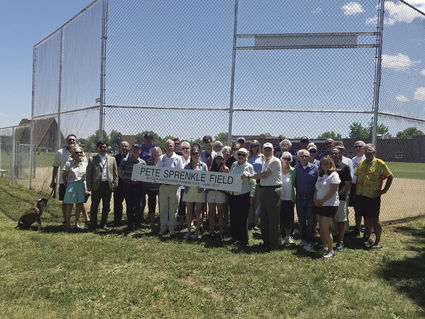 The Boulder Valley Girls Softball Association (BVGSA), along with the Boulder Valley School District and the Foothills Kiwanis Club of Boulder honored long-time coach and volunteer Pete Sprenkle by re-naming the ballfield at Horizons K-8 School in Boulder in his honor. In a ceremony June 13, the field formerly known as Burke Field, located at 4365 Sioux Drive in Boulder, was dedicated as Pete Sprenkle Field. Sprenkle said, “I thank the BVSD for this honor and I also thank the many parents, players and coaches who have helped me along through this incredible journey. I could not have succeeded without them.”

On Oct. 25, 1978, Sprenkle, along with Kay Martinez of Boulder and Jackson Taylor of Gunbarrel, incorporated BVGSA, with assistance from Suzie Noel. Sprenkle, who lived in Boulder and worked at IBM, coached a girls softball team in the 1978 inaugural season for Gunbarrel Lefthand Valley Recreation Association’s (GLVRA, now known as Niwot Youth Sports) softball program. Sprenkle saw the need for a softball program serving the entire Boulder Valley area, and worked with Martinez, a coach with two girls who played softball, and Taylor, who was then president of GLVRA, to form BVGSA.

The school district’s resolution approving the re-naming of the field noted, “Pete Sprenkle, a member of the Foothills Kiwanis Club, moved to Boulder and saw Horizon (Burke) Field full of weeds and trash, and not at all usable as a ballfield for the young people of Boulder. He saw the unusable field as an opportunity, and in 1978 he founded Boulder Valley Girls’ Softball Association (BVGSA) figuring that, after a thorough clean up in the spring of 1979, the field could become one of the venues for the new BVGSA program.

“Over the intervening years Pete ‘adopted’ the Horizon Field as a labor of love and maintained it up until recently so that boys and girls in the BVGSA, YMCA, and South Boulder Little League programs would have a safe and acceptable place to play ball.

Every spring Pete organized a Clean Up day in conjunction with the Foothills Kiwanis Club of Boulder and cleaned up the fields and park area to get ready for the new season.

“Several times Pete, working with BVSD Operations and the Foothills Kiwanis Club, had trees planted in the park area to enhance the appearance of the park.

A number of years ago Pete bought a large drag which he used on a regular basis to drag the field (using his own car to pull the drag) which both kept the weeds out and maintained the playing surface of the field as fairly flat. When the infield needed dirt Pete worked with BVSD Operations Staff to source and spread the dirt thus maintaining a good playing surface for the field.”

In announcing the ceremony, Goodard said, “For those that do not know Pete, he is the reason BVGSA exists and IPGSA. On top of that, Pete has been a coach, mentor and volunteer for fifty-plus years. However, that really is just the beginning to the truly awesome person Pete is.”