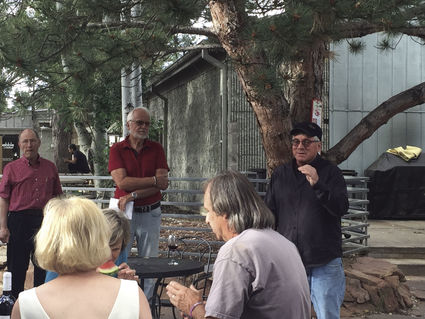 Niwot Business Association President Tony Santelli welcomed the crowd and introduced Bert Steele of Niwot Market, which hosted the June 13 meeting. Steele expressed appreciation for the longevity of the market and thanked his management team, including his daughter Alison, whom he introduced. He is excited about the abundance of organic produce available to him from local wholesalers and invited everyone to shop in the produce department.

Niwot Cultural Arts Association president Biff Warren reported that progress was being made on the acquisition of property which could be used for a small parking lot near downtown which could provide alternative parking to vehicles which now park in the residential areas of downtown.

Warren, along with emcee Satir DeMarco and co-manager Dan Hawk reported that the first two weeks of Rock & Rails concerts have been successful, with the second concert bringing in higher than average tips and revenue. Volunteers are still needed and everyone was cautioned about unsupervised children, including an incident where children climbed on to the roof of the caboose. It was mentioned that the proximity of the Whistlestop Park to Children’s Park creates a family friendly atmosphere.

Anne Postle gave an enthusiastic report about the June 1st First Friday Art Walk and announced that the winning artwork has been converted to custom labels on select bottles of wine, which are great for Niwot-themed gifts, and are available at Niwot Liquor.

Several new businesses are scheduled to open in Niwot this summer, including Lucky Pie restaurant in Cottonwood Square, Old Oak Coffeehouse in the space formerly occupied by the Eye Opener, and Wheel House bike shop in the space formerly housing Rockin’ Robin’s, which has moved to Longmont.

Kathy Koehler of the Niwot Community Association confirmed that the 4th of July Parade and accompanying activities will launch at the crack of dawn with a pancake breakfast, a concert by the Niwot Community Semi-Marching Free Grange Band, and children’s bicycle decorating, culminating with a traditional parade beginning at 11 a.m.. The event sponsors are the NCA, Niwot Market and the Niwot Local Improvement District.

Niwot High School principal Eric Rauschkolb noted that business teacher Scott Robles, who is also a Niwot High alum, will be the educational outreach liaison to the NBA. Robles owned and operated a business for many years before entering the teaching profession. Rauschkolb also noted that Niwot High School was the top-ranked public high school in the state according to U.S. News and World Reports.

NCA president Dick Piland spoke briefly of the plan to participate in National Night Out August 1st, which first responders and law enforcement agencies participating in a community event. This will be the first time the NCA organizes the event locally, with details to follow.

The next NBA meeting is scheduled for July 11 at Colterra’s restaurant.