NHS graduates the Class of 2017 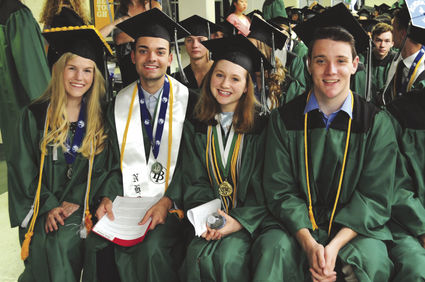 Photo. by Jennifer Simms Niwot High School seniors (from left) Emily Greenspan, Jack Edmond, Erica Walters, and Daniel Fiamengo wait in the cafeteria for their graduation ceremony to begin. The ceremony was held indoors this year due to inclement weather.

Dark clouds gathered on the horizon as students, families, and friends gathered at Niwot High School to celebrate the graduation of the Class of 2017. Typically, graduation is held outdoors on the football field east of the school. But this year stormy weather drove the event inside.

Teacher Jason Watkins, who has been at NHS for 20 years, said this was his first indoor graduation. Fortunately, the change in venue didn’t detract from the significance of the day for the more than 280 students who crossed the stage.

“The students were a bit disappointed to be inside at first, but it didn’t stop the giant smiles when getting their diplomas,” said NHS assistant principal Susan Burnett.

The ceremony was held in the main gym, with seating for immediate family, and additional guests could watch a livestream of the event in the auditorium, thanks to Watkins and DTS (district tech services).

“Several staff commented that inside felt more intimate and formal,” Burnett said of the setting. In addition, “Parents were able to see better and could take pictures because they were so much closer.” 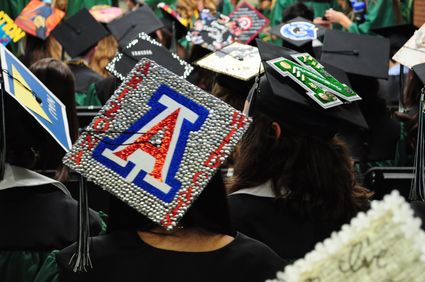 Photo by Jennifer Simms NHS Seniors at the 2017 graduation ceremony used their caps to express their accomplishments, their personalities, or their plans for the future.

Speakers during the ceremony included student body President Jack Edmond, IB valedictorian Emily Greenspan, traditional valedictorian Erica Walters and faculty speaker Andrew Roberts. Roberts, a math teacher, was selected to speak by the senior class and gave an address inspired by the quote, “Every generation thinks it’s the end of the world,” from Jeff Tweedy of the band Wilco, and a survey Roberts gave students asking what worried them most.

Said Roberts, “It’s with 100 percent confidence that I can say you are people who will organize against fear and ignorance and fight the powers that be, solve big problems, and embrace the future.”

Burnett also expressed great hope and confidence for this year’s graduates. “They are full of amazing and talented students. My wish for them is that they can find their passion and wake up every morning and love their life and what they do.”