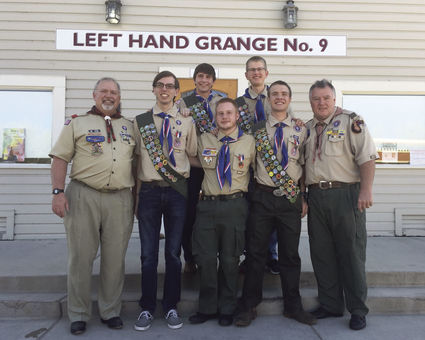 Courtesy Photo Eagle Scouts from Troop 161 gather for a photo with their leaders they have had since being Tiger Cubs. Back row from left, Tommy Stager and Aidan Sesnic. Front row from left, Mark Stager, Drew Heidemann, Isaac Robare, Duncan Barrett and Johnny Barrett.

Last month, Boy Scout Troop 161 held a Court of Honor, a regular event to recognize scouts for their achievements.

What makes this special, former scout leader Johnny Barrett said, is that Robare joins four of his peers as Eagle Scouts who all started together in Cub Scouts as first graders.

“Only about five percent of scouts make the rank of Eagle,” Barrett said. “So to have five of them that went through, all of them get through all of the scout levels and end up getting Eagle is extremely rare.”

They’ve all been active. All five earned the Arrow of Light — the highest rank in Cub Scouts before moving on from Pack 161 to Troop 161. Both groups are sponsored by Left Hand Grange Number 9.

After the boys earned their life rank, it takes 21 merit badges, including specifically required ones, along with their Eagle project, to qualify..

Another thing that was recognized were Palms, something Barrett said many people do not know about.

They are awarded to scouts who go above and beyond what it takes to become an Eagle Scout.

These were awarded to Tommy Stager for 36 badges — worth three palms — and Duncan Barrett who earned 41 badges and received four palms.

Barrett said that these achievements are worth celebrating.

“They age out at 18,” Barrett said. “Most of them struggle to get to the Eagle rank, and to earn palms on top of that just makes it even more rare.”

All five young men will be graduating from high school this year, and Barrett said their contributions to the community have been great over the years.

“As a result of those steps, the county is connecting more trails for the community to use.”

There are 35 members of Troop 161 currently. They’ve had to hold back numbers at times over the years, Barrett said.

“Scouting is a big deal in Niwot, and we should be proud to boast so many Eagle Scouts,” Barrett said. “Some of it goes to the leadership in the unit, the parents that are involved, the community and of course the boys themselves.”

With scouting, Barrett said that there is no telling what can come in the future.

“It’s exciting because they’re all flying off — if you will — and for me they’ve done their best,” Barrett said. “That’s what scouting is, being prepared and doing your best.

“There are so many success stories about Eagle Scouts — presidents and astronauts, senators --- have earned the Eagle rank. Scouting gives you something you don’t get in school or in everyday life.”

Barrett mentioned that the scouts’ infamous popcorn is similar to the cookies from the Girl Scouts.

“When the boys come around selling stuff, it’s going into the unit,” Barrett said. “But the Left Hand Grange has been supporting the unit for longer than I can remember. It’s great to have them as a sponsor.”

For now, the group of Eagle Scouts are almost ready to head out into the post-high school world, but no matter what route they choose to take, Troop 161 will still celebrate sending five Eagles out on their journeys.

“This is about the boys,” Barrett said. “They’re going to go off and help guide our future, build the leadership, work with people … you just don’t know where these five boys will go. It takes a lot of work to get to where they made it. I’m excited to see where they will fly.”