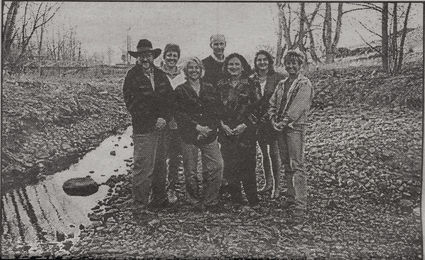 I distinctly recall thinking, “How hard could this be?” when seven of us got together in November 1996 to talk about starting a newspaper for Niwot and Gunbarrel.

I assumed that everybody could write well, that people would jump at the chance to send us photos and cool stories of their kids and that businesses would be knocking down our door to advertise.

Except that we didn’t have a door.

And my expectations were, to put it kindly, wildly optimistic. All of us had other things to do, like working at real jobs, raising kids and volunteering in the community.

I think one of us (can’t remember which) had once written a column for a newspaper. At least one more had worked on a student newspaper in high school. We all read newspapers. So we had experience.

By April 1, 1997, we had actually put together our first issue (laid out on Mary Lopert’s ping pong table), gotten it printed, and personally delivered it to over 8,000 homes and businesses. Selene Hall sold the ads and managed the business, Karen Copperberg wrote columns and edited stories, Lori Lindemann took photos and wrote about schools, Ron Goodman walked the streets to find news and drew cartoons, and Vicki Maurer, my longtime co-worker at the law office, took care of weddings and obituaries and kept things together. Mary Lopert and I were writing humor columns and sports, respectively, when we weren’t having Comma Wars (I put them in, and she took them out, or was it vice-versa?).

For a long time the partners delivered most of the papers. My son Michael and his friend Mike Anderson once convinced me to let them rollerblade down the street while hanging on to the open trunk of my car so they could toss papers to both sides of the street. It seemed like a good idea at the time. I took a phone call the following day from an irate Twin Lakes resident who had seen them and called to report the “dangerous activity.” I told her I would personally look into the matter, and “Thank you, ma’am, for bringing this to our attention.”

Fast forward 20 years and we’re still at it. We’ve had some amazing people work with us over the years. We all miss the late Ron Goodman, who brought a unique and thoughtful perspective to the paper.

We found Ed Navarro taking amazing photos at most every Niwot High School sporting event and convinced him to send them to us for publication. He’s still at it, and has yet to accept a paycheck.

We first found former ad director Allison Forke (who retired twice before moving to Wyoming) at her daughter’s soccer game (coached by the tailgating rollerbladers), talking to a friend about how that great little newspaper in Niwot should run a photo of her kids’ lemonade stand. And there are countless others who have helped make it happen.

Four of the remaining partners are still involved with the paper on a weekly basis, and all six of us are still good friends, which is saying a lot.

We’ve made our share of mistakes, and learned that “no good deed goes unpunished” are words to live by.

Growing up, I recall a sign on the wall of my dad’s office: “Consider the day lost if I don’t catch hell about something.” We haven’t had too many lost days, but we’re still having fun, and as long as that’s the case, we’ll be here.

In terms of fair and accurate reporting it was the above mentioned Mary Lopert who put the commas back in. A copy of of Eats Shoots and Leaves by Lynne Truss fixed the problem and permanently ended Comma Wars.